Real-time tests of multiple genome alterations take the first steps into the clinic: a learning example 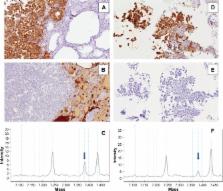 Molecular characterization is increasingly changing clinical practice, in both diagnosis and treatment. BRAF is a proto-oncogene that is mutated in ~2%–4% of lung cancers, but the incidence rises to 40%–45% among papillary thyroid cancers. Furthermore, BRAF is a promising target in lung cancer treatment. The present case study covers both the challenges of molecular differential diagnosis and the perspectives opened by targeted therapy by discussing the history of a 78-year-old female affected by a papillary histotype carcinoma with BRAF mutation associated with both thyroid and lung localizations. A differential diagnosis was possible as a consequence of a multidisciplinary approach including an in-depth molecular characterization. Based on this molecular feature, the patient was successfully treated with the BRAF inhibitor dabrafenib after the failure of treatment with standard regimen. To the best of our knowledge, this is the first published case of non-small-cell lung cancer with metastasis to thyroid and with BRAF V600E mutation.

Toxicity and response criteria of the Eastern Cooperative Oncology Group.

Increasing incidence of differentiated thyroid cancer in the United States, 1988-2005.

Ahmedin Jemal,  E. Ward,  Julie Y. Chen … (2009)
Studies have reported an increasing incidence of thyroid cancer since 1980. One possible explanation for this trend is increased detection through more widespread and aggressive use of ultrasound and image-guided biopsy. Increases resulting from increased detection are most likely to involve small primary tumors rather than larger tumors, which often present as palpable thyroid masses. The objective of the current study was to investigate the trends in increasing incidence of differentiated (papillary and follicular) thyroid cancer by size, age, race, and sex. Cases of differentiated thyroid cancer (1988-2005) were analyzed using the National Cancer Institute's Surveillance Epidemiology and End Results (SEER) dataset. Trends in incidence rates of papillary and follicular cancer, race, age, sex, primary tumor size ( 4 cm), and SEER stage (localized, regional, distant) were analyzed using joinpoint regression and reported as the annual percentage change (APC). Incidence rates increased for all sizes of tumors. Among men and women of all ages, the highest rate of increase was for primary tumors or =4 cm among men (1988-2005: APC, 3.7) and women (1988-2005: APC, 5.70) and for distant SEER stage disease among men (APC, 3.7) and women (APC, 2.3). The incidence rates of differentiated thyroid cancers of all sizes increased between 1988 and 2005 in both men and women. The increased incidence across all tumor sizes suggested that increased diagnostic scrutiny is not the sole explanation. Other explanations, including environmental influences and molecular pathways, should be investigated.