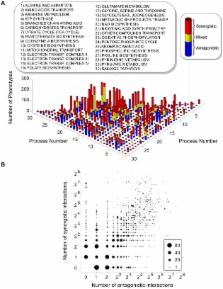 An epistatic interaction between two genes occurs when the phenotypic impact of one gene depends on another gene, often exposing a functional association between them. Due to experimental scalability and to evolutionary significance, abundant work has been focused on studying how epistasis affects cellular growth rate, most notably in yeast. However, epistasis likely influences many different phenotypes, affecting our capacity to understand cellular functions, biochemical networks adaptation, and genetic diseases. Despite its broad significance, the extent and nature of epistasis relative to different phenotypes remain fundamentally unexplored. Here we use genome-scale metabolic network modeling to investigate the extent and properties of epistatic interactions relative to multiple phenotypes. Specifically, using an experimentally refined stoichiometric model for Saccharomyces cerevisiae, we computed a three-dimensional matrix of epistatic interactions between any two enzyme gene deletions, with respect to all metabolic flux phenotypes. We found that the total number of epistatic interactions between enzymes increases rapidly as phenotypes are added, plateauing at approximately 80 phenotypes, to an overall connectivity that is roughly 8-fold larger than the one observed relative to growth alone. Looking at interactions across all phenotypes, we found that gene pairs interact incoherently relative to different phenotypes, i.e. antagonistically relative to some phenotypes and synergistically relative to others. Specific deletion-deletion-phenotype triplets can be explained metabolically, suggesting a highly informative role of multi-phenotype epistasis in mapping cellular functions. Finally, we found that genes involved in many interactions across multiple phenotypes are more highly expressed, evolve slower, and tend to be associated with diseases, indicating that the importance of genes is hidden in their total phenotypic impact. Our predictions indicate a pervasiveness of nonlinear effects in how genetic perturbations affect multiple metabolic phenotypes. The approaches and results reported could influence future efforts in understanding metabolic diseases and the role of biochemical regulation in the cell.

An epistatic interaction between two genes occurs when the phenotypic impact of one gene is dependent on the other. While different phenotypes have been used to uncover epistasis in different contexts, little is known about how cell-scale genetic interaction networks vary across multiple phenotypes. Here we use a genome-scale mathematical model of yeast metabolism to compute a three-dimensional matrix of interactions between any two gene deletions with respect to all metabolic flux phenotypes. We find that this multi-phenotype epistasis map contains many more interactions than found relative to any single phenotype. The unique contribution of examining multiple phenotypes is further demonstrated by the fact that individual interactions may be synergistic relative to some phenotypes and antagonistic relative to others. This observation indicates that different phenotypes are indeed capturing different aspects of the functional relationships between genes. Furthermore, the observation that genes involved in many epistatic interactions across all metabolic flux phenotypes are found to be highly expressed and under strong selective pressure seems to indicate that these interactions are important to the cell and are not just the unavoidable consequence of the connectivity of biological networks. Multi-phenotype epistasis maps may help elucidate the functional organization of biological systems and the role of epistasis in the manifestation of complex genetic diseases.

Epistasis--the essential role of gene interactions in the structure and evolution of genetic systems.

P. W. Phillips (2008)
Epistasis, or interactions between genes, has long been recognized as fundamentally important to understanding the structure and function of genetic pathways and the evolutionary dynamics of complex genetic systems. With the advent of high-throughput functional genomics and the emergence of systems approaches to biology, as well as a new-found ability to pursue the genetic basis of evolution down to specific molecular changes, there is a renewed appreciation both for the importance of studying gene interactions and for addressing these questions in a unified, quantitative manner.

Analysis of optimality in natural and perturbed metabolic networks.

Daniel R Church,  Dennis Vitkup,  George Church … (2002)
An important goal of whole-cell computational modeling is to integrate detailed biochemical information with biological intuition to produce testable predictions. Based on the premise that prokaryotes such as Escherichia coli have maximized their growth performance along evolution, flux balance analysis (FBA) predicts metabolic flux distributions at steady state by using linear programming. Corroborating earlier results, we show that recent intracellular flux data for wild-type E. coli JM101 display excellent agreement with FBA predictions. Although the assumption of optimality for a wild-type bacterium is justifiable, the same argument may not be valid for genetically engineered knockouts or other bacterial strains that were not exposed to long-term evolutionary pressure. We address this point by introducing the method of minimization of metabolic adjustment (MOMA), whereby we test the hypothesis that knockout metabolic fluxes undergo a minimal redistribution with respect to the flux configuration of the wild type. MOMA employs quadratic programming to identify a point in flux space, which is closest to the wild-type point, compatibly with the gene deletion constraint. Comparing MOMA and FBA predictions to experimental flux data for E. coli pyruvate kinase mutant PB25, we find that MOMA displays a significantly higher correlation than FBA. Our method is further supported by experimental data for E. coli knockout growth rates. It can therefore be used for predicting the behavior of perturbed metabolic networks, whose growth performance is in general suboptimal. MOMA and its possible future extensions may be useful in understanding the evolutionary optimization of metabolism.

Publisher ID: 10-PLGE-RA-3764R2
DOI: 10.1371/journal.pgen.1001294
PMC ID: 3037399
PubMed ID: 21347328
Copyright statement: This is an open-access article distributed under the terms of the Creative Commons Public Domain declaration which stipulates that, once placed in the public domain, this work may be freely reproduced, distributed, transmitted, modified, built upon, or otherwise used by anyone for any lawful purpose.