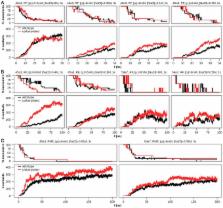 The high concentration of macromolecules in the crowded cellular interior influences different thermodynamic and kinetic properties of proteins, including their structural stabilities, intermolecular binding affinities and enzymatic rates. Moreover, various structural biology methods, such as NMR or different spectroscopies, typically involve samples with relatively high protein concentration. Due to large sampling requirements, however, the accuracy of classical molecular dynamics (MD) simulations in capturing protein behavior at high concentration still remains largely untested. Here, we use explicit-solvent MD simulations and a total of 6.4 µs of simulated time to study wild-type (folded) and oxidatively damaged (unfolded) forms of villin headpiece at 6 mM and 9.2 mM protein concentration. We first perform an exhaustive set of simulations with multiple protein molecules in the simulation box using GROMOS 45a3 and 54a7 force fields together with different types of electrostatics treatment and solution ionic strengths. Surprisingly, the two villin headpiece variants exhibit similar aggregation behavior, despite the fact that their estimated aggregation propensities markedly differ. Importantly, regardless of the simulation protocol applied, wild-type villin headpiece consistently aggregates even under conditions at which it is experimentally known to be soluble. We demonstrate that aggregation is accompanied by a large decrease in the total potential energy, with not only hydrophobic, but also polar residues and backbone contributing substantially. The same effect is directly observed for two other major atomistic force fields (AMBER99SB-ILDN and CHARMM22-CMAP) as well as indirectly shown for additional two (AMBER94, OPLS-AAL), and is possibly due to a general overestimation of the potential energy of protein-protein interactions at the expense of water-water and water-protein interactions. Overall, our results suggest that current MD force fields may distort the picture of protein behavior in biologically relevant crowded environments.

Protein behavior is strongly affected by highly crowded and interaction-rich environments, i.e., typical conditions in both biologically relevant systems, such as the cellular interior, and solution-based structural experiments, including NMR and different spectroscopies. On the other hand, primarily because of limited computational power, molecular dynamics (MD) simulations, a premier high-resolution method for analyzing structure, dynamics and interactions of proteins, have been predominantly used to study individual proteins at infinite dilution. To fill this gap, we use MD simulations to study the behavior of wild-type (aggregation-resistant) and oxidatively damaged (aggregation-prone) forms of villin headpiece at high concentration, and reveal unexpected limitations and inaccuracies of modern-day MD force fields when it comes to modeling proteins at physiologically or experimentally relevant concentrations.

Diffusion, Crowding & Protein Stability in a Dynamic Molecular Model of the Bacterial Cytoplasm

Rationalization of the effects of mutations on peptide and protein aggregation rates.

Giampietro Ramponi,  Niccolò Taddei,  Massimo Stefani … (2003)
In order for any biological system to function effectively, it is essential to avoid the inherent tendency of proteins to aggregate and form potentially harmful deposits. In each of the various pathological conditions associated with protein deposition, such as Alzheimer's and Parkinson's diseases, a specific peptide or protein that is normally soluble is deposited as insoluble aggregates generally referred to as amyloid. It is clear that the aggregation process is generally initiated from partially or completely unfolded forms of the peptides and proteins associated with each disease. Here we show that the intrinsic effects of specific mutations on the rates of aggregation of unfolded polypeptide chains can be correlated to a remarkable extent with changes in simple physicochemical properties such as hydrophobicity, secondary structure propensity and charge. This approach allows the pathogenic effects of mutations associated with known familial forms of protein deposition diseases to be rationalized, and more generally enables prediction of the effects of mutations on the aggregation propensity of any polypeptide chain.

How robust are protein folding simulations with respect to force field parameterization?

Stefano Piana,  Kresten Lindorff-Larsen,  David E. Shaw (2011)
Molecular dynamics simulations hold the promise of providing an atomic-level description of protein folding that cannot easily be obtained from experiments. Here, we examine the extent to which the molecular mechanics force field used in such simulations might influence the observed folding pathways. To that end, we performed equilibrium simulations of a fast-folding variant of the villin headpiece using four different force fields. In each simulation, we observed a large number of transitions between the unfolded and folded states, and in all four cases, both the rate of folding and the structure of the native state were in good agreement with experiments. We found, however, that the folding mechanism and the properties of the unfolded state depend substantially on the choice of force field. We thus conclude that although it is important to match a single, experimentally determined structure and folding rate, this does not ensure that a given simulation will provide a unique and correct description of the full free-energy surface and the mechanism of folding. Copyright © 2011 Biophysical Society. Published by Elsevier Inc. All rights reserved.