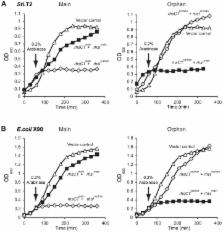 Clonally derived bacterial populations exhibit significant genotypic and phenotypic diversity that contribute to fitness in rapidly changing environments. Here, we show that serial passage of Salmonella enterica serovar Typhimurium LT2 ( StLT2) in broth, or within a mouse host, results in selection of an evolved population that inhibits the growth of ancestral cells by direct contact. Cells within each evolved population gain the ability to express and deploy a cryptic “orphan” toxin encoded within the rearrangement hotspot ( rhs) locus. The Rhs orphan toxin is encoded by a gene fragment located downstream of the “main” rhs gene in the ancestral strain StLT2. The Rhs orphan coding sequence is linked to an immunity gene, which encodes an immunity protein that specifically blocks Rhs orphan toxin activity. Expression of the Rhs orphan immunity protein protects ancestral cells from the evolved lineages, indicating that orphan toxin activity is responsible for the observed growth inhibition. Because the Rhs orphan toxin is encoded by a fragmented reading frame, it lacks translation initiation and protein export signals. We provide evidence that evolved cells undergo recombination between the main rhs gene and the rhs orphan toxin gene fragment, yielding a fusion that enables expression and delivery of the orphan toxin. In this manner, rhs locus rearrangement provides a selective advantage to a subpopulation of cells. These observations suggest that rhs genes play important roles in intra-species competition and bacterial evolution.

Salmonella Typhimurium is a bacterium that causes intestinal diseases in a number of animals including humans. In mice, this pathogen invades tissues, causing symptoms similar to typhoid fever. In an effort to understand the evolution of this pathogen, we grew S. Typhimurium in either liquid broth or in mice for many generations and examined the resulting “evolved” strains to determine if they were different from the original “parent” culture. We found that many of these evolved strains inhibited the growth of the parent after they were mixed together, and that this growth inhibition requires that the evolved and parental cells are in close contact. Genetic analysis showed that this contact-dependent growth inhibition requires Rhs protein, which has a toxic tip. Salmonella is normally resistant to its Rhs toxin because it also produces an immunity protein that blocks toxin activity. However, evolved cells have undergone a DNA rearrangement that allows them to express a different Rhs toxic tip that inhibits growth of the parental cells, which lack immunity to it. This allows the evolved cells to outgrow the original parental cells. Our work indicates that populations of Salmonella are dynamic, with individuals battling with each other for dominance.

Structure and regulation of the type VI secretion system.

Yannick Brunet,  Eric Cascales,  Andrew Silverman … (2011)
The type VI secretion system (T6SS) is a complex and widespread gram-negative bacterial export pathway with the capacity to translocate protein effectors into a diversity of target cell types. Current structural models of the T6SS indicate that the apparatus is composed of at least two complexes, a dynamic bacteriophage-like structure and a cell-envelope-spanning membrane-associated assembly. How these complexes interact to promote effector secretion and cell targeting remains a major question in the field. As a contact-dependent pathway with specific cellular targets, the T6SS is subject to tight regulation. Thus, the identification of regulatory elements that control T6S expression continues to shape our understanding of the environmental circumstances relevant to its function. This review discusses recent progress toward characterizing T6S structure and regulation.

David Low,  Bruce A. Braaten,  Aaron D Hernday … (2005)
Bacteria have developed mechanisms to communicate and compete with each other for limited environmental resources. We found that certain Escherichia coli, including uropathogenic strains, contained a bacterial growth-inhibition system that uses direct cell-to-cell contact. Inhibition was conditional, dependent upon the growth state of the inhibitory cell and the pili expression state of the target cell. Both a large cell-surface protein designated Contact-dependent inhibitor A (CdiA) and two-partner secretion family member CdiB were required for growth inhibition. The CdiAB system may function to regulate the growth of specific cells within a differentiated bacterial population.

This study was supported by grants from the National Institutes of Health (U54 AI065359 to DAL, and R01 GM078634 to CSH), the National Science Foundation (0642052 to DAL) and the Swedish Research Council (to DIA). SK was supported by grants from Santa Barbara Cottage Hospital, and the Carl Tryggers Stiftelse and Wenner-Gren foundations. The funders had no role in study design, data collection and analysis, decision to publish, or preparation of the manuscript.