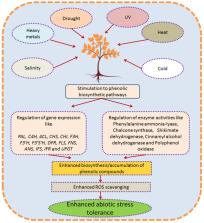 Phenolic compounds are an important class of plant secondary metabolites which play crucial physiological roles throughout the plant life cycle. Phenolics are produced under optimal and suboptimal conditions in plants and play key roles in developmental processes like cell division, hormonal regulation, photosynthetic activity, nutrient mineralization, and reproduction. Plants exhibit increased synthesis of polyphenols such as phenolic acids and flavonoids under abiotic stress conditions, which help the plant to cope with environmental constraints. Phenylpropanoid biosynthetic pathway is activated under abiotic stress conditions (drought, heavy metal, salinity, high/low temperature, and ultraviolet radiations) resulting in accumulation of various phenolic compounds which, among other roles, have the potential to scavenge harmful reactive oxygen species. Deepening the research focuses on the phenolic responses to abiotic stress is of great interest for the scientific community. In the present article, we discuss the biochemical and molecular mechanisms related to the activation of phenylpropanoid metabolism and we describe phenolic-mediated stress tolerance in plants. An attempt has been made to provide updated and brand-new information about the response of phenolics under a challenging environment.

Ron Mittler (2005)
Farmers and breeders have long known that often it is the simultaneous occurrence of several abiotic stresses, rather than a particular stress condition, that is most lethal to crops. Surprisingly, the co-occurrence of different stresses is rarely addressed by molecular biologists that study plant acclimation. Recent studies have revealed that the response of plants to a combination of two different abiotic stresses is unique and cannot be directly extrapolated from the response of plants to each of the different stresses applied individually. Tolerance to a combination of different stress conditions, particularly those that mimic the field environment, should be the focus of future research programs aimed at developing transgenic crops and plants with enhanced tolerance to naturally occurring environmental conditions.

Catherine Rice,  Jeremy Spencer,  J. Williams … (2004)
Many studies are accumulating that report the neuroprotective, cardioprotective, and chemopreventive actions of dietary flavonoids. While there has been a major focus on the antioxidant properties, there is an emerging view that flavonoids, and their in vivo metabolites, do not act as conventional hydrogen-donating antioxidants but may exert modulatory actions in cells through actions at protein kinase and lipid kinase signalling pathways. Flavonoids, and more recently their metabolites, have been reported to act at phosphoinositide 3-kinase (PI 3-kinase), Akt/protein kinase B (Akt/PKB), tyrosine kinases, protein kinase C (PKC), and mitogen activated protein kinase (MAP kinase) signalling cascades. Inhibitory or stimulatory actions at these pathways are likely to affect cellular function profoundly by altering the phosphorylation state of target molecules and by modulating gene expression. A clear understanding of the mechanisms of action of flavonoids, either as antioxidants or modulators of cell signalling, and the influence of their metabolism on these properties are key to the evaluation of these potent biomolecules as anticancer agents, cardioprotectants, and inhibitors of neurodegeneration

Transcriptome changes for Arabidopsis in response to salt, osmotic, and cold stress.

Yajun Wu,  Tamar A Kreps,  Tong Zhu … (2003)
To identify genes of potential importance to cold, salt, and drought tolerance, global expression profiling was performed on Arabidopsis plants subjected to stress treatments of 4 degrees C, 100 mM NaCl, or 200 mM mannitol, respectively. RNA samples were collected separately from leaves and roots after 3- and 27-h stress treatments. Profiling was conducted with a GeneChip microarray with probe sets for approximately 8,100 genes. Combined results from all three stresses identified 2,409 genes with a greater than 2-fold change over control. This suggests that about 30% of the transcriptome is sensitive to regulation by common stress conditions. The majority of changes were stimulus specific. At the 3-h time point, less than 5% (118 genes) of the changes were observed as shared by all three stress responses. By 27 h, the number of shared responses was reduced more than 10-fold (< 0.5%), consistent with a progression toward more stimulus-specific responses. Roots and leaves displayed very different changes. For example, less than 14% of the cold-specific changes were shared between root and leaves at both 3 and 27 h. The gene with the largest induction under all three stress treatments was At5g52310 (LTI/COR78), with induction levels in roots greater than 250-fold for cold, 40-fold for mannitol, and 57-fold for NaCl. A stress response was observed for 306 (68%) of the known circadian controlled genes, supporting the hypothesis that an important function of the circadian clock is to "anticipate" predictable stresses such as cold nights. Although these results identify hundreds of potentially important transcriptome changes, the biochemical functions of many stress-regulated genes remain unknown.