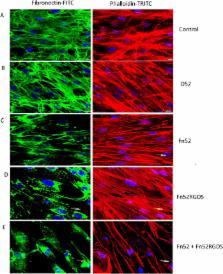 TGF-β and myofibroblasts play a key role in fibrosis, characterized by aberrant synthesis and deposition of extracellular matrix (ECM) proteins, such as fibronectin (Fn) and collagen type I. There are two major roles played by integrins in the fibrotic pathology: (i) Fn-integrin interaction, coupled with cytokines like TGF-β, facilitates the self-polymerization of Fn and regulates cell–matrix fibrillar adhesions, thereby promoting fibrillogenesis; (ii) Integrin interaction with an RGD (arginine-glycine–aspartic) consensus sequence in the latent TGF-β, resulting in its activation. This study describes an anti-fibrotic strategy using a combination of two antibodies: Fn52 (targeted against the N-terminal 30 kDa region of fibronectin, a major site for Fn self-association), and its engineered form, Fn52RGDS (which binds to integrins). Interestingly, a synergistic effect of the cocktail in causing a decline in fibrotic features was confirmed in the context of fibrotic posterior capsular opacification (PCO), mediated by the lens epithelial cells (left behind after cataract surgery). Inclusion of Fn52RGDS to Fn52 aids in better diffusion of the antibodies; such combination therapies could be useful in the context of pathologies involving extensive remodeling of the fibronectin matrix, where the thick ECM offers a major challenge for efficient drug delivery.

R Jain,  Alan Grodzinsky,  M. Swartz … (2000)
The extracellular matrix (ECM) may contribute to the drug resistance of a solid tumor by preventing the penetration of therapeutic agents. We measured differences in interstitial resistance to macromolecule (IgG) motion in four tumor types and found an unexpected correspondence between transport resistance and the mechanical stiffness. The interstitial diffusion coefficient of IgG was measured in situ by fluorescence redistribution after photobleaching. Tissue elastic modulus and hydraulic conductivity were measured by confined compression of excised tissue. In apparent contradiction to an existing paradigm, these functional properties are correlated with total tissue content of collagen, not glycosaminoglycan. An extended collagen network was observed in the more penetration-resistant tumors. Collagenase treatment of the more penetration-resistant tumors significantly increased the IgG interstitial diffusion rate. We conclude that collagen influences the tissue resistance to macromolecule transport, possibly by binding and stabilizing the glycosaminoglycan component of the ECM. These findings suggest a new method to screen tumors for potential resistance to macromolecule-based therapy. Moreover, collagen and collagen-proteoglycan bonds are identified as potential targets of treatment to improve macromolecule delivery.

Ivan Stamenkovic (2003)
Matrix metalloproteinases (MMPs) are a growing family of metalloendopeptidases that cleave the protein components of the extracellular matrix and thereby play a central role in tissue remodelling. For many years following their discovery, MMPs were believed to function primarily as regulators of ECM composition and to facilitate cell migration simply by removing barriers such as collagen. It is becoming increasingly clear, however, that MMPs are implicated in the functional regulation of a host of non-ECM molecules that include growth factors and their receptors, cytokines and chemokines, adhesion receptors and cell surface proteoglycans, and a variety of enzymes. MMPs therefore play an important role in the control of cellular interactions with and response to their environment in conditions that promote tissue turnover, be they physiological, such as normal development, or pathological, such as inflammation and cancer. This review summarizes some of the recent discoveries that have shed new light on the role of MMPs in physiology and disease. Copyright 2003 John Wiley & Sons, Ltd.

Jean Schwarzbauer,  Sheng-yong Mao (2005)
The extracellular matrix provides a framework for cell adhesion, supports cell movement, and serves to compartmentalize tissues into functional units. Fibronectin is a core component of many extracellular matrices where it regulates a variety of cell activities through direct interactions with cell surface integrin receptors. Fibronectin is synthesized by many adherent cells which then assemble it into a fibrillar network. The assembly process is integrin-dependent and fibronectin-integrin interactions initiate a step-wise process involving conformational activation of fibronectin outside and organization of the actin cytoskeleton inside. During assembly, fibronectin undergoes conformational changes that expose fibronectin-binding sites and promote intermolecular interactions needed for fibril formation. In this review, the main steps of fibronectin assembly are described and recent studies on fibronectin conformational changes are discussed.