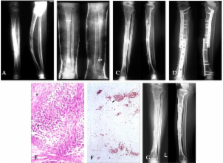 To report long term treatment outcomes of osteofibrous dysplasia and association with adamantinoma.

Thirteen patients had a lesion in the tibia, while one patient had lesions in both the tibia and the fibula. Initial treatments were observation after biopsy (6 patients), curettage with or without a bone graft (3 patients), resection followed by a free vascularized fibular bone graft (4 patients), or resection and regeneration with the Ilizarov external fixation (1 patient). Curettage was performed on 6 patients due to recurrence or progression after the initial treatment. Among these patients, one was diagnosed with AD from the biopsy of the recurrent lesion. This patient was further treated by segmental resection and pasteurization. After the initial pathology slides of the 13 patients were reviewed with immunohistochemical cytokeratin staining, one patient diagnosis was changed from osteofibrous dysplasia to osteofibrous dysplasia-like adamantinoma.

Current trends in the management of adamantinoma of long bones. An international study.

S Gitelis, Mohtashim A. Qureshi, M A Mallin … (2000)
Adamantinoma of long bones is a rare tumor. Published reviews of the orthopaedic management of adamantinoma have involved limited follow-up of small numbers of patients. The oncological aggressiveness of this tumor is unknown. Limb salvage is currently the treatment of choice for most adamantinomas. The purpose of this study was to evaluate the characteristics of adamantinoma of long bones as well as the oncological outcome and the complications of limb salvage operations. A retrospective study was designed to evaluate the clinical outcomes of limb salvage operations for the treatment of adamantinoma. Data on seventy biopsy-proven cases of adamantinoma treated between 1982 and 1992 at twenty-three different cancer centers in Europe and North America were obtained. The median duration of follow-up was 7.0 years. The male:female ratio was 3:2, and the mean age was thirty-one years. Limb salvage was attempted in 91 percent (sixty-four) of the seventy patients, and the final rate of limb preservation was 84 percent (fifty-nine of seventy). Wide operative margins were obtained in 92 percent (fifty-eight) of sixty-three patients. An intercalary allograft was used to reconstruct the segmental bone defect in 51 percent (thirty-six) of the seventy patients. Reconstruction-related complications occurred in 48 percent (thirty) of sixty-two patients. Nonunion and fracture were the most common complications, occurring in 24 percent (fifteen) and 23 percent (fourteen) of sixty-two patients, respectively. Kaplan-Meier analysis demonstrated a rate of local recurrence of 18.6 percent at ten years. Wide operative margins were associated with a lower rate of local recurrence than marginal or intralesional margins were (p < 0.00005). Kaplan-Meier analysis showed a survival rate of 87.2 percent at ten years. There were no significant relationships between survival and the stage of the tumor (p = 0.058), duration of symptoms (p = 0.90), gender (p = 0.79), or wide operative margins (p = 0.14). Current treatment of adamantinoma, including en bloc tumor resection with wide operative margins and limb salvage, provides lower rates of local recurrence than has been previously reported. In the present study, the limb preservation rate was 84 percent (fifty-nine of seventy), and the survival rate was 87.2 percent at ten years. The rate of complications related to the limb reconstruction was high.

Adamantinoma of the long bones. A clinicopathological study of thirty-two patients with emphasis on histological subtype, precursor lesion, and biological behavior.

Hans Hazelbag, P Hogendoorn, Jan Taminiau … (1994)
The records of thirty-two patients who had had an adamantinoma of the long bones were examined to investigate the relationship between the clinical presentation, the histological subtype, and the method of treatment, and the clinical result. All histological patterns of differentiation that are characteristic of adamantinoma were observed, including the basaloid, spindle-cell, tubular, squamous, and osteofibrous dysplasia-like subtypes. Follow-up data were available for twenty-eight (88 per cent) of the thirty-two patients. These patients were followed for a mean duration of 122 months (range, eleven months to twenty-nine years and two months). Nine patients (32 per cent), all of whom had been managed with an intralesional or marginal procedure, had a local recurrence of the tumor after a mean disease developed in three of the nine patients. In five other patients, metastasis developed without having been preceded by a local recurrence. Thus, the over-all rate of metastasis was 29 per cent (eight patients). The mean duration of survival for the patients who had metastasis was twelve years and eight months. Statistical analysis of various clinicopathological variables revealed intralesional or marginal excision to be the most significant risk factor for a local recurrence or metastasis (p < 0.001). Two patients who had had a presumed osteofibrous dysplasia-like adamantinoma, which contained few isolated keratin-positive epithelial cells within the stroma at the time of presentation, had a full-blown adamantinoma at the time of the local recurrence. Although the clinical course that was observed may be the result of a sampling error, it poses questions as to the regressive nature of osteofibrous dysplasia-like adamantinoma. On the basis of our findings and the data in the literature, we believe that an osteofibrous dysplasia-like adamantinoma may be a precursor lesion of the classic type of adamantinoma.

This is an Open Access article distributed under the terms of the Creative Commons Attribution Non-Commercial License ( http://creativecommons.org/licenses/by-nc/3.0) which permits unrestricted noncommercial use, distribution, and reproduction in any medium, provided the original work is properly cited.