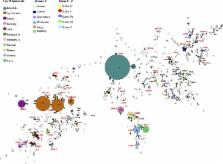 In April 2015, Public Health England implemented whole genome sequencing (WGS) as a routine typing tool for public health surveillance of Salmonella, adopting a multilocus sequence typing (MLST) approach as a replacement for traditional serotyping. The WGS derived sequence type (ST) was compared to the phenotypic serotype for 6,887 isolates of S. enterica subspecies I, and of these, 6,616 (96%) were concordant. Of the 4% ( n = 271) of isolates of subspecies I exhibiting a mismatch, 119 were due to a process error in the laboratory, 26 were likely caused by the serotype designation in the MLST database being incorrect and 126 occurred when two different serovars belonged to the same ST. The population structure of S. enterica subspecies II–IV differs markedly from that of subspecies I and, based on current data, defining the serovar from the clonal complex may be less appropriate for the classification of this group. Novel sequence types that were not present in the MLST database were identified in 8.6% of the total number of samples tested (including S. enterica subspecies I–IV and S. bongori) and these 654 isolates belonged to 326 novel STs. For S. enterica subspecies I, WGS MLST derived serotyping is a high throughput, accurate, robust, reliable typing method, well suited to routine public health surveillance. The combined output of ST and serovar supports the maintenance of traditional serovar nomenclature while providing additional insight on the true phylogenetic relationship between isolates.

B. O’Brien,  ,  Martyn Kirk … (2010)
To estimate the global burden of nontyphoidal Salmonella gastroenteritis, we synthesized existing data from laboratory-based surveillance and special studies, with a hierarchical preference to (1) prospective population-based studies, (2) "multiplier studies," (3) disease notifications, (4) returning traveler data, and (5) extrapolation. We applied incidence estimates to population projections for the 21 Global Burden of Disease regions to calculate regional numbers of cases, which were summed to provide a global number of cases. Uncertainty calculations were performed using Monte Carlo simulation. We estimated that 93.8 million cases (5th to 95th percentile, 61.8-131.6 million) of gastroenteritis due to Salmonella species occur globally each year, with 155,000 deaths (5th to 95th percentile, 39,000-303,000 deaths). Of these, we estimated 80.3 million cases were foodborne. Salmonella infection represents a considerable burden in both developing and developed countries. Efforts to reduce transmission of salmonellae by food and other routes must be implemented on a global scale.

Multilocus Sequence Typing as a Replacement for Serotyping in Salmonella enterica

Ross Davidson,  Louise Clark,  Richard Harris … (2008)
We have determined the complete genome sequences of a host-promiscuous Salmonella enterica serovar Enteritidis PT4 isolate P125109 and a chicken-restricted Salmonella enterica serovar Gallinarum isolate 287/91. Genome comparisons between these and other Salmonella isolates indicate that S. Gallinarum 287/91 is a recently evolved descendent of S. Enteritidis. Significantly, the genome of S. Gallinarum has undergone extensive degradation through deletion and pseudogene formation. Comparison of the pseudogenes in S. Gallinarum with those identified previously in other host-adapted bacteria reveals the loss of many common functional traits and provides insights into possible mechanisms of host and tissue adaptation. We propose that experimental analysis in chickens and mice of S. Enteritidis-harboring mutations in functional homologs of the pseudogenes present in S. Gallinarum could provide an experimentally tractable route toward unraveling the genetic basis of host adaptation in S. enterica.