Evaluation of ceftiofur–PHBV microparticles in rats 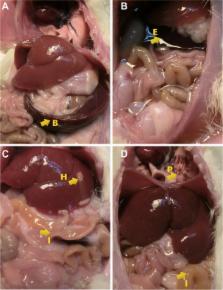 Despite the high number of antibiotics used for the treatment of infectious disease in animals, the development of slow release formulations presents a significant challenge, particularly in using novel biomaterials with low cost. In this report, we studied the pharmacokinetics, toxicity, and therapeutic activity of ceftiofur–PHBV (ceftiofur–poly(3-hydroxybutyrate-co-3-hydroxyvalerate)) in rats. The pharmacokinetic study demonstrated a sustained release of ceftiofur into the bloodstream, with detectable levels over the minimum inhibitory concentration for at least 17 days after a single intramuscular injection of ceftiofur–PHBV (10 mg/kg weight). In addition, the toxicological evaluation of biochemical, hematological, and coagulation blood parameters at the therapeutic dose demonstrated the safety of ceftiofur–PHBV, with no adverse effects. In addition, ceftiofur–PHBV exhibited a therapeutic effect for a longer time period than the nonencapsulated ceftiofur in rats challenged with Salmonella Typhimurium. The slow release of ceftiofur from the ceftiofur–PHBV, its low toxicity in the blood parameters evaluated, and the efficacy in the rats infected with Salmonella Typhimurium make ceftiofur–PHBV a strong candidate for biotechnological applications in the veterinary industry.

Fluorouracil, leucovorin, and oxaliplatin with and without cetuximab in the first-line treatment of metastatic colorectal cancer.

Serban Donea,  Piotr Koralewski,  Carsten Bokemeyer … (2009)
This randomized study assessed whether the best overall response rate (ORR) of cetuximab combined with oxaliplatin, leucovorin, and fluorouracil (FOLFOX-4) was superior to that of FOLFOX-4 alone as first-line treatment for metastatic colorectal cancer. The influence of KRAS mutation status was investigated. Patients received cetuximab (400 mg/m(2) initial dose followed by 250 mg/m(2)/wk thereafter) plus FOLFOX-4 (oxaliplatin 85 mg/m(2) on day 1, plus leucovorin 200 mg/m(2) and fluorouracil as a 400 mg/m(2) bolus followed by a 600 mg/m(2) infusion during 22 hours on days 1 and 2; n = 169) or FOLFOX-4 alone (n = 168). Treatment was continued until disease progression or unacceptable toxicity. KRAS mutation status was assessed in the subset of patients with assessable tumor samples (n = 233). The confirmed ORR for cetuximab plus FOLFOX-4 was higher than with FOLFOX-4 alone (46% v 36%). A statistically significant increase in the odds for a response with the addition of cetuximab to FOLFOX-4 could not be established (odds ratio = 1.52; P = .064). In patients with KRAS wild-type tumors, the addition of cetuximab to FOLFOX-4 was associated with a clinically significant increased chance of response (ORR = 61% v 37%; odds ratio = 2.54; P = .011) and a lower risk of disease progression (hazard ratio = 0.57; P = .0163) compared with FOLFOX-4 alone. Cetuximab plus FOLFOX-4 was generally well tolerated. KRAS mutational status was shown to be a highly predictive selection criterion in relation to the treatment decision regarding the addition of cetuximab to FOLFOX-4 for previously untreated patients with metastatic colorectal cancer.

Arnold Demain,  Sergio Sánchez (2009)
Microbes have made a phenomenal contribution to the health and well-being of people throughout the world. In addition to producing many primary metabolites, such as amino acids, vitamins and nucleotides, they are capable of making secondary metabolites, which constitute half of the pharmaceuticals on the market today and provide agriculture with many essential products. This review centers on these beneficial secondary metabolites, the discovery of which goes back 80 years to the time when penicillin was discovered by Alexander Fleming.

Cephalosporins in veterinary medicine - ceftiofur use in food animals.

Susan F Kotarski,  Rex Hornish (2002)
Cephalosporins are an important class of antibacterial agents in use today for both humans and animals. Four generations of cephalosporins have evolved, all of which contain the beta-lactam sub-structure first found in penicillin. The range of cephalosporins available for use in food-producing animals, which is the subject of this review, is limited compared to humans. A few first- and second-generation cephalosporins are approved worldwide strictly for treatment of mastitis infections in dairy cattle. A third-generation cephalosporin, ceftiofur, and a fourth-generation cephalosporin, cefquinome, have been developed strictly for veterinary use. Cefquinome has been approved in several countries for the treatment of respiratory disease in cattle and swine, foot rot in cattle and for mastitis in dairy cattle. Ceftiofur has worldwide approvals for respiratory disease in swine, ruminants (cattle, sheep and goats) and horses and has also been approved for foot rot and metritis infections in cattle. Ceftiofur has also been approved in various countries for early mortality infections in day-old chicks and turkey poults. This review summarizes cephalosporin use in general terms, and provides an overview of ceftiofur, in terms of its spectrum of activity, indications, metabolism, and degradation in the environment. The safety of ceftiofur is also reviewed, with respect to food-animal residues, rapid metabolism and degradation, and non-persistence of ceftiofur in the environment. The environmental fragility of cephalosporins have not been explored generally, but may be an important characteristic of this antibiotic class with respect to safety of use in animals.