Pigmentary mosaicism: a review of original literature and recommendations for future handling 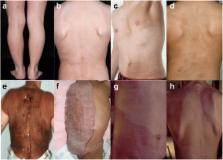 Pigmentary mosaicism is a term that describes varied patterns of pigmentation in the skin caused by genetic heterogeneity of the skin cells. In a substantial number of cases, pigmentary mosaicism is observed alongside extracutaneous abnormalities typically involving the central nervous system and the musculoskeletal system. We have compiled information on previous cases of pigmentary mosaicism aiming to optimize the handling of patients with this condition. Our study is based on a database search in PubMed containing papers written in English, published between January 1985 and April 2017. The search yielded 174 relevant and original articles, detailing a total number of 651 patients.

We recommend a uniform parlance when describing the clinical picture of pigmentary mosaicism. Based on the results found in this review, we recommend that patients with pigmentary mosaicism undergo physical examination, highlighting with Wood’s light, and karyotyping from peripheral blood lymphocytes and skin fibroblasts. It is important that both patients with and without extracutaneous manifestations are tested cytogenetically, as the frequency of abnormal karyotype in the two groups seems comparable. According to the results only a minor part of patients, especially those without extracutaneous manifestations, are tested today reflecting a need for change in clinical practice.

J Curry, L Voullaire, L Sheffield … (1994)
We report six persons mosaic for a chromosome anomaly. All were mentally retarded and dysmorphic. Unilateral or asymmetrical features were found in all cases, in one an unusual transverse terminal limb anomaly, and in the others various degrees of hemiatrophy of the left side of the body. Five of the subjects had skin pigmentary anomalies which were distributed in the lines of Blaschko. The abnormal cell lines found were ring chromosome 22, trisomy 22, a large acrocentric marker, a deletion of 18q, a deletion of 8q, and triploidy. In four cases the clinical diagnosis was only confirmed by skin biopsy. In one case low level mosaicism in blood was fortuitously detected because of cytogenetic fragile X screening and confirmed in a skin biopsy. The sixth case was of dynamic mosaicism of a non-mosaic deletion 18q with a chromosome 18 derived marker present in a proportion of cells. Chromosome mosaicisn may cause subtle and asymmetrical clinical features and can require repeated cytogenetic investigations. The diagnosis should be actively sought as it enables accurate genetic counselling to be given.

Hypomelanosis of Ito: diagnostic criteria and report of 41 cases.

A Laterza, Mario Maldonado, V. Castillo Gimenez … (1992)
We conducted a 20-year prospective review of 41 pediatric patients with a diagnosis of hypomelanosis of Ito. No evidence pointed to hereditary transmission of the disease. Associated extracutaneous pathology was mainly of the nervous and musculoskeletal systems. Three of 19 patients had chromosomal anomalies. Hypomelanosis of Ito is a clinically well-characterized syndrome in which chromosomal instability may be a component. Criteria for its presumptive and definitive diagnosis are proposed.