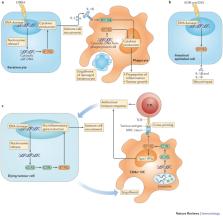 Activation of STING (stimulator of interferon genes) by cytosolic aberrant DNA species or cyclic dinucleotides triggers transcription of numerous innate immune genes. In this Review, the author summarizes recent insights into the regulation of STING signalling and its role in autoinflammatory disease and cancer.

The rapid detection of microbial agents is essential for the effective initiation of host defence mechanisms against infection. Understanding how cells detect cytosolic DNA to trigger innate immune gene transcription has important implications — not only for comprehending the immune response to pathogens but also for elucidating the causes of autoinflammatory disease involving the sensing of self-DNA and the generation of effective antitumour adaptive immunity. The discovery of the STING (stimulator of interferon genes)-controlled innate immune pathway, which mediates cytosolic DNA-induced signalling events, has recently provided important insights into these processes, opening the way for the development of novel immunization regimes, as well as therapies to treat autoinflammatory disease and cancer.

Cyclic GMP-AMP synthase is a cytosolic DNA sensor that activates the type I interferon pathway.

Zhijian Chen,  Lijun Sun,  Jiaxi Wu … (2013)
The presence of DNA in the cytoplasm of mammalian cells is a danger signal that triggers host immune responses such as the production of type I interferons. Cytosolic DNA induces interferons through the production of cyclic guanosine monophosphate-adenosine monophosphate (cyclic GMP-AMP, or cGAMP), which binds to and activates the adaptor protein STING. Through biochemical fractionation and quantitative mass spectrometry, we identified a cGAMP synthase (cGAS), which belongs to the nucleotidyltransferase family. Overexpression of cGAS activated the transcription factor IRF3 and induced interferon-β in a STING-dependent manner. Knockdown of cGAS inhibited IRF3 activation and interferon-β induction by DNA transfection or DNA virus infection. cGAS bound to DNA in the cytoplasm and catalyzed cGAMP synthesis. These results indicate that cGAS is a cytosolic DNA sensor that induces interferons by producing the second messenger cGAMP.

Innate and adaptive immune cells in the tumor microenvironment.

Hiroki Ishikawa,  Glen N. Barber (2008)
We report here the identification, following expression cloning, of a molecule, STING (STimulator of INterferon Genes) that regulates innate immune signaling processes. STING, comprising 5 putative transmembrane (TM) regions, predominantly resides in the endoplasmic reticulum (ER) and is able to activate both NF-κB and IRF3 transcription pathways to induce type I IFN and exert a potent anti-viral state following expression. In contrast, loss of STING rendered murine embryonic fibroblasts (STING −/−MEFs) extremely susceptible to negative-stranded virus infection, including vesicular stomatitis virus, VSV. Further, STING ablation abrogated the ability of intracellular B-form DNA, as well as members of the herpes virus family, to induce IFNβ, but did not significantly affect the Toll-like receptor (TLR pathway). Yeast-two hybrid and co-immunprecipitation studies indicated that STING interacts with RIG-I and with Ssr2/TRAPβ, a member of the translocon-associated protein (TRAP) complex required for protein translocation across the ER membrane following translation[1, 2]. RNAi ablation of TRAPβ and translocon adaptor Sec61β was subsequently found to inhibit STING’s ability to stimulate IFNβ. Thus, aside from identifying a novel regulator of innate immune signaling, this data implicates for the first time a potential role for the translocon in innate signaling pathways activated by select viruses as well as intracellular DNA.

Glen Barber is the Chairman of the Department of Cell Biology and the Associate Director of the University of Miami Sylvester Cancer Center, Florida, USA. A key interest of his group has been to characterize the innate immune regulator referred to as STING (stimulator of interferon genes), originally discovered in his laboratory.