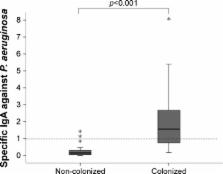 The bronchial mucosa is protected by a specialized immune system focused on the prevention of colonization and infection by potentially pathogenic microorganisms (PPMs). Immunoglobulin A (IgA) is the principal antibody involved in this mechanism. A defective immune barrier may facilitate the recurrent presence of PPMs in COPD.

The aim of this study was to determine IgA-mediated bronchial specific immune responses against Pseudomonas aeruginosa in stable patients with severe disease.

COPD patients with good-quality sputum samples obtained during stability were included and classified according to the presence or absence of chronic bronchial colonization by P. aeruginosa. Levels of specific IgA for P. aeruginosa in sputum were determined by ELISA and expressed as ratios, using the pooled level of 10 healthy subjects as reference (optical density 450 patient/control).

Thirty-six stable COPD patients were included, 15 of whom had chronic colonization by P. aeruginosa. Levels of specific IgA against P. aeruginosa in stable non-colonized patients were lower than those in healthy subjects (IgA ratio: median =0.15 [interquartile range {IQR} 0.05–0.36]). Colonized patients had higher levels, (1.56 [IQR 0.59–2.79]) ( p<0.001, Mann–Whitney U test), with figures equivalent but not exceeding the reference value.

J Roca,  J Sanchís,  A Agusti-Vidal … (2015)
Maximal expiratory flow-volume (MEFV) curves were measured in 1044 healthy nonsmoking volunteers living in the Barcelona area, as part of a larger interhospital project to obtain reference values of pulmonary function tests. Forced vital capacity (FVC), one-second forced expiratory volume (FEV1), FEV1/FVC, %, forced maximal mid-expiratory flow (FEF25-75%), peak expiratory flow rate (PEF) and maximal expiratory flow at 50 and 75% of FVC (MEF50% and MEF25% respectively) were obtained and expressed at BTPS conditions. Techniques and equipments followed both the recommendations of the American Thoracic Society (ATS) and of the European Community for Coal and Steel (ECCS). Prediction equations for age 20 through 70 were calculated for both sexes from a final sample composed of 870 adult subjects, 443 males and 427 females. Simple linear equations using height, age and body weight predicted all spirometric variables as well as more complex equations except MEF25%. Logarithmic equations were proposed for MEF25% to correct for the heteroscedasticity shown in a simple linear model. To our knowledge, this study provides reliable spirometric equations from a large urban Mediterranean sample which were lacking so far in the literature.