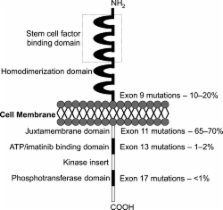 Gastrointestinal stromal tumor (GIST) is a rare primary neoplasm of the gastrointestinal tract, mesentery, or omentum. In the past, surgery has been the only effective treatment. The diagnosis and treatment of GIST has been revolutionized over the past decade, since expression of the receptor tyrosine kinase KIT was shown to occur on these tumors. Mutations in this proto-oncogene commonly cause constitutive activation of the KIT tyrosine kinase receptor, an important factor in the pathogenesis of the disease. The development of specific tyrosine kinase inhibitors, such as imatinib mesylate, has led to a breakthrough in the treatment of advanced GIST. Treatment with this drug has led to significant improvements in survival, with overall response rates in excess of 80%. Side effects are common, but usually manageable. The success of this drug has led to further trials investigating its use in the pre- and postoperative situation. This review summarizes the current knowledge of GIST and imatinib treatment and possible future developments.

D B Longley,  Gordon J. Berman,  Christopher Fletcher … (2002)
As a result of major recent advances in understanding the biology of gastrointestinal stromal tumors (GISTs), specifically recognition of the central role of activating KIT mutations and associated KIT protein expression in these lesions, and the development of novel and effective therapy for GISTs using the receptor tyrosine kinase inhibitor STI-571, these tumors have become the focus of considerable attention by pathologists, clinicians, and patients. Stromal/mesenchymal tumors of the gastrointestinal tract have long been a source of confusion and controversy with regard to classification, line(s) of differentiation, and prognostication. Characterization of the KIT pathway and its phenotypic implications has helped to resolve some but not all of these issues. Given the now critical role of accurate and reproducible pathologic diagnosis in ensuring appropriate treatment for patients with GIST, the National Institutes of Health convened a GIST workshop in April 2001 with the goal of developing a consensus approach to diagnosis and morphologic prognostication. Key elements of the consensus, as described herein, are the defining role of KIT immunopositivity in diagnosis and a proposed scheme for estimating metastatic risk in these lesions, based on tumor size and mitotic count, recognizing that it is probably unwise to use the definitive term "benign" for any GIST, at least at the present time. Copyright 2002, Elsevier Science (USA). All rights reserved.

Effects of a selective inhibitor of the Abl tyrosine kinase on the growth of Bcr-Abl positive cells.

S TAMURA,  ELISABETH BUCHDUNGER,  Luc J. Zimmermann … (1996)
The bcr-abl oncogene, present in 95% of patients with chronic myelogenous leukemia (CML), has been implicated as the cause of this disease. A compound, designed to inhibit the Abl protein tyrosine kinase, was evaluated for its effects on cells containing the Bcr-Abl fusion protein. Cellular proliferation and tumor formation by Bcr-Abl-expressing cells were specifically inhibited by this compound. In colony-forming assays of peripheral blood or bone marrow from patients with CML, there was a 92-98% decrease in the number of bcr-abl colonies formed but no inhibition of normal colony formation. This compound may be useful in the treatment of bcr-abl-positive leukemias.