Efficacy of Personalized Cognitive Counseling in Men of Color who Have Sex with Men: Secondary Data Analysis from a Controlled Intervention Trial 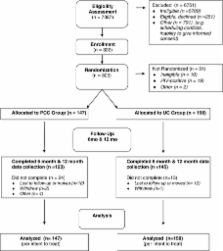 In a previous report, we demonstrated the efficacy of a cognitively based counseling intervention compared to standard counseling at reducing episodes of unprotected anal intercourse (UAI) among men who have sex with men (MSM) seeking HIV testing. Given the limited number of efficacious prevention interventions for MSM of color (MOC) available, we analyzed the data stratified into MOC and whites. The sample included 196 white MSM and 109 MOC (23 African Americans, 36 Latinos, 22 Asians, eight Alaskan Natives/Native Americans/Hawaiian/Pacific Islander, and 20 of mixed or other unspecified race). Among MOC in the intervention group, the mean number of episodes of UAI declined from 5.1 to 1.6 at six months and was stable at 12 months (1.8). Among the MOC receiving standard counseling, the mean number of UAI episodes was 4.2 at baseline, 3.9 at six months and 2.1 at 12 months. There was a significant treatment effect overall (relative risk 0.59, 95% confidence interval 0.35–0.998). These results suggest that the intervention is effective in MOC.

D Shehan,  S Stoyanoff,  L Valleroy … (2000)
Studies conducted in the late 1980s on human immunodeficiency virus (HIV) infection among older men who have sex with men (MSM) suggested the epidemic had peaked; however, more recent studies in younger MSM have suggested continued high HIV incidence. To investigate the current state of the HIV epidemic among adolescent and young adult MSM in the United States by assessing the prevalence of HIV infection and associated risks in this population in metropolitan areas. The Young Men's Survey, a cross-sectional, multisite, venue-based survey conducted from 1994 through 1998. One hundred ninety-four public venues frequented by young MSM in Baltimore, Md; Dallas, Tex; Los Angeles, Calif; Miami, Fla; New York, NY; the San Francisco (Calif) Bay Area; and Seattle, Wash. A total of 3492 15- to 22-year-old MSM who consented to an interview and HIV testing. Prevalence of HIV infection and associated characteristics and risk behaviors. Prevalence of HIV infection was high (overall, 7.2%; range for the 7 areas, 2.2%-12. 1%) and increased with age, from 0% among 15-year-olds to 9.7% among 22-year-olds. Multivariate-adjusted HIV infection prevalence was higher among blacks (odds ratio [OR], 6.3; 95% confidence interval [CI], 4.1-9.8), young men of mixed or other race (OR, 4.8; 95% CI, 3. 0-7.6), and Hispanics (OR, 2.3; 95% CI, 1.5-3.4), compared with whites (referent) and Asian Americans and Pacific Islanders (OR, 1. 1; 95% CI, 0.5-2.8). Factors most strongly associated with HIV infection were being black, mixed, or other race; having ever had anal sex with a man (OR, 5.0; 95% CI, 1.8-13.8); or having had sex with 20 or more men (OR, 3.0; 95% CI, 2.0-4.7). Only 46 (18%) of the 249 HIV-positive men knew they were infected before this testing; 37 (15%) were receiving medical care for HIV, and 19 (8%) were receiving medical drug therapy for HIV. Prevalence of unprotected anal sex during the past 6 months was high (overall, 41%; range, 33%-49%). Among these young MSM, HIV prevalence was high, underscoring the need to evaluate and intensify prevention efforts for young MSM, particularly blacks, men of mixed race or ethnicity, Hispanics, and adolescents. JAMA. 2000;284:198-204

Predictors of unprotected sex among young sexually active African American, Hispanic, and White MSM: the importance of ethnicity and culture.

Brief cognitive counseling with HIV testing to reduce sexual risk among men who have sex with men: results from a randomized controlled trial using paraprofessional counselors.

Christopher Woods,  Kimberly J. Nelson,  Barbara Adler … (2007)
To test the efficacy and acceptability of a single-session personalized cognitive counseling (PCC) intervention delivered by paraprofessionals during HIV voluntary counseling and testing. HIV-negative men who have sex with men (MSM; n = 336) were randomly allocated to PCC or usual counseling (UC) between October 2002 and September 2004. The primary outcome was the number of episodes of unprotected anal intercourse (UAI) with any nonprimary partner of nonconcordant HIV serostatus in the preceding 90 days, measured at baseline, 6 months, and 12 months. Impact was assessed as "intent to treat" by random-intercept Poisson regression analysis. Acceptability was assessed by a standardized client satisfaction survey. Men receiving PCC and UC reported comparable levels of HIV nonconcordant UAI at baseline (mean episodes: 4.2 vs. 4.8, respectively; P = 0.151). UAI decreased by more than 60% to 1.9 episodes at 6 months in the PCC arm (P < 0.001 vs. baseline) but was unchanged at 4.3 episodes for the UC arm (P = 0.069 vs. baseline). At 6 months, men receiving PCC reported significantly less risk than those receiving UC (P = 0.029 for difference to PCC). Risk reduction in the PCC arm was sustained from 6 to 12 months at 1.9 (P = 0.181), whereas risk significantly decreased in the UC arm to 2.2 during this interval (P < 0.001 vs. 6 months; P = 0.756 vs. PCC at 12 months). Significantly more PCC participants were "very satisfied" with the counseling experience (78.2%) versus UC participants (59.2%) (P = 0.002). Both interventions were effective in reducing high-risk sexual behavior among MSM repeat testers. PCC participants demonstrated significant behavioral change more swiftly and reported a more satisfying counseling experience than UC participants.