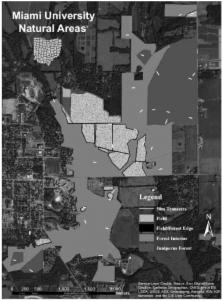 We investigated whether white-tailed deer browse on the invasive shrub, Amur honeysuckle, supports key assumptions of the hypothesis that invasives with extended leaf phenology (ELP) impact natives via “apparent competition,” elevating the impact of a shared herbivore. We found that deer browse on honeysuckle was particularly high in early spring, a time of protein scarcity. The leafy twigs of honeysuckle in early spring were higher in protein than leafless twigs of native trees. We estimated that consumption of honeysuckle twigs accounted for 14-47% of the annual food consumption of deer in the study site. These findings show that the hypothesis of apparent competition is compelling.

It has been hypothesized that invasive plant species with extended leaf phenology (ELP) elevate generalist herbivore populations, increasing herbivory on native plants (apparent competition). This hypothesis assumes that consumption of the invasive is associated with periods of ELP, the invasive is a major component of the herbivore’s diet, and that it is more nutritious than native plants during periods of ELP. We tested these assumptions by estimating the proportion of the white-tailed deer diet comprised of Lonicera maackii, an invasive shrub with ELP, quantifying the seasonal pattern of deer browse on this invasive shrub, and comparing its nutritional quality to leafless woody stems. In the Miami University Natural Areas in southwest Ohio we quantified the frequency of leafy twigs of woody species 0.3–2.1 m high in three habitats (deciduous forest, Juniperus virginiana forest, and forest-field edge). Monthly we quantified deer browse on marked L. maackii twigs, and estimated the mass of leaf and stem tissue consumed with allometric relationships using diameter and length of unbrowsed twig portions. We estimated the percent of the annual deer diet comprised of L. maackii by dividing the sum of these estimates by the product of deer abundance (estimated by pellet-based distance sampling) and consumption estimates from the literature. Crude protein of L. maackii stems and leaves was determined by C:N analyser. In each habitat the frequency of L. maackii was greater than all other woody species combined. We estimated L. maackii comprised 14–47 % of the annual deer diet. Deer browsed L. maackii each month, but consumption was high in early spring and late summer. Crude protein of leafy twigs of L. maackii in early spring was 12.9 %, much higher than leafless twigs of native species on-site. These findings support the assumptions of the hypothesis that invasive plants with ELP impact native plants via deer-mediated apparent competition.

Predation, apparent competition, and the structure of prey communities

Jason D. Fridley (2012)
The phenology of growth in temperate deciduous forests, including the timing of leaf emergence and senescence, has strong control over ecosystem properties such as productivity and nutrient cycling, and has an important role in the carbon economy of understory plants. Extended leaf phenology, whereby understory species assimilate carbon in early spring before canopy closure or in late autumn after canopy fall, has been identified as a key feature of many forest species invasions, but it remains unclear whether there are systematic differences in the growth phenology of native and invasive forest species or whether invaders are more responsive to warming trends that have lengthened the duration of spring or autumn growth. Here, in a 3-year monitoring study of 43 native and 30 non-native shrub and liana species common to deciduous forests in the eastern United States, I show that extended autumn leaf phenology is a common attribute of eastern US forest invasions, where non-native species are extending the autumn growing season by an average of 4 weeks compared with natives. In contrast, there was no consistent evidence that non-natives as a group show earlier spring growth phenology, and non-natives were not better able to track interannual variation in spring temperatures. Seasonal leaf production and photosynthetic data suggest that most non-native species capture a significant proportion of their annual carbon assimilate after canopy leaf fall, a behaviour that was virtually absent in natives and consistent across five phylogenetic groups. Pronounced differences in how native and non-native understory species use pre- and post-canopy environments suggest eastern US invaders are driving a seasonal redistribution of forest productivity that may rival climate change in its impact on forest processes.

Kara Miller,  David L. Gorchov (2004)
Effects of invasive plant species on native plant species are frequently assumed or inferred from comparisons, but rarely quantified experimentally. Such quantification is important to assessing risks and impacts of invasives. We quantified the effects of Lonicera maackii, an exotic shrub invasive in many eastern North American forests, on survival, growth, and reproduction of three perennial herbs: Allium burdickii, Thalictrum thalictroides , and Viola pubescens. We predicted that the spring ephemeral, A. burdickii , would be most impacted, due to early leaf expansion of L. maackii. Field experiments were carried out in two deciduous forest stands, one (Gregg's Woodlot, GW) disturbed and the other (Western Woods, WW) relatively undisturbed. In each stand, individual herbs were transplanted into a blocked design of 60 plots where L. maackii was present, absent, or removed, and monitored for 5 growing seasons. Lonicera maackii did not affect survival of transplants, but reduced growth and final size of individuals of all three species. For two of the species, A. burdickii and V. pubescens, L. maackii reduced the proportion of live plants flowering in both stands, and reduced the seed or fruit number per flowering individual in GW. For T. thalictroides the proportion flowering was not affected, but seed number per flowering plant was reduced by L. maackii in both stands. For all three species, cumulative seed production over the course of the study was reduced by L. maackii. Overall, effects on the spring ephemeral, A. burdickii, were similar to effects on the other herbs. Because mortality of these established individuals was not affected, short-term studies might conclude forest herbs are unaffected by invasive shrubs. However, the growth and reproduction impacts documented here suggest that populations are impacted in the long-term.