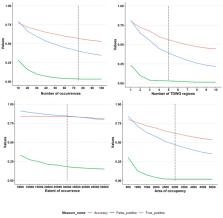 The IUCN Red List of Threatened Species TM (hereafter the Red List) is an important global resource for conservation that supports conservation planning, safeguarding critical habitat and monitoring biodiversity change ( Rodrigues et al. 2006). However, a major shortcoming of the Red List is that most of the world's described species have not yet been assessed and published on the Red List ( Bachman et al. 2019 Eisenhauer et al. 2019). Conservation efforts can be better supported if the Red List is expanded to achieve greater coverage of mega-diverse groups of organisms such as plants, fungi and invertebrates. There is, therefore, an urgent need to speed up the Red List assessment and documentation workflow.

One reason for this lack of species coverage is that a manual and relatively time-consuming procedure is usually employed to assess and document species. A recent update of Red List documentation standards ( IUCN 2013) reduced the data requirements for publishing non-threatened or 'Least Concern' species on the Red List. The majority of the required fields for Least Concern plant species can be found in existing open-access data sources or can be easily calculated. There is an opportunity to consolidate these data and analyses into a simple application to fast-track the publication of Least Concern assessments for plants. There could be as many as 250,000 species of plants (60%) likely to be categorised as Least Concern ( Bachman et al. 2019), for which automatically generated assessments could considerably reduce the outlay of time and valuable resources for Red Listing, allowing attention and resources to be dedicated to the assessment of those species most likely to be threatened.

We present a web application, Rapid Least Concern, that addresses the challenge of accelerating the generation and documentation of Least Concern Red List assessments. Rapid Least Concern utilises open-source datasets, such as the Global Biodiversity Information Facility ( GBIF) and Plants of the World Online (POWO) through a simple web interface. Initially, the application is intended for use on plants, but it could be extended to other groups, depending on the availability of equivalent datasets for these groups.

Rapid Least Concern users can assess a single species or upload a list of species that are assessed in a batch operation. The batch operation can either utilise georeferenced occurrence data from GBIF or occurrence data provided by the user. The output includes a series of CSV files and a point map file that meet the minimum data requirements for a Least Concern Red List assessment ( IUCN 2013). The CSV files are compliant with the IUCN Red List SIS Connect system that transfers the data files to the IUCN database and, pending quality control checks and review, publication on the Red List.

We outline the knowledge gap this application aims to fill and describe how the application works. We demonstrate a use-case for Rapid Least Concern as part of an ongoing initiative to complete a global Red List assessment of all native species for the United Kingdom Overseas Territory of Bermuda.

F Donald,  S Wiedenfeld,  Gregory McCarthy … (2012)
World governments have committed to halting human-induced extinctions and safeguarding important sites for biodiversity by 2020, but the financial costs of meeting these targets are largely unknown. We estimate the cost of reducing the extinction risk of all globally threatened bird species (by ≥1 International Union for Conservation of Nature Red List category) to be U.S. $0.875 to $1.23 billion annually over the next decade, of which 12% is currently funded. Incorporating threatened nonavian species increases this total to U.S. $3.41 to $4.76 billion annually. We estimate that protecting and effectively managing all terrestrial sites of global avian conservation significance (11,731 Important Bird Areas) would cost U.S. $65.1 billion annually. Adding sites for other taxa increases this to U.S. $76.1 billion annually. Meeting these targets will require conservation funding to increase by at least an order of magnitude.

Green Plants in the Red: A Baseline Global Assessment for the IUCN Sampled Red List Index for Plants

Neil A. Brummitt,  Steven Bachman,  Janine Griffiths-Lee … (2015)
Plants provide fundamental support systems for life on Earth and are the basis for all terrestrial ecosystems; a decline in plant diversity will be detrimental to all other groups of organisms including humans. Decline in plant diversity has been hard to quantify, due to the huge numbers of known and yet to be discovered species and the lack of an adequate baseline assessment of extinction risk against which to track changes. The biodiversity of many remote parts of the world remains poorly known, and the rate of new assessments of extinction risk for individual plant species approximates the rate at which new plant species are described. Thus the question ‘How threatened are plants?’ is still very difficult to answer accurately. While completing assessments for each species of plant remains a distant prospect, by assessing a randomly selected sample of species the Sampled Red List Index for Plants gives, for the first time, an accurate view of how threatened plants are across the world. It represents the first key phase of ongoing efforts to monitor the status of the world’s plants. More than 20% of plant species assessed are threatened with extinction, and the habitat with the most threatened species is overwhelmingly tropical rain forest, where the greatest threat to plants is anthropogenic habitat conversion, for arable and livestock agriculture, and harvesting of natural resources. Gymnosperms (e.g. conifers and cycads) are the most threatened group, while a third of plant species included in this study have yet to receive an assessment or are so poorly known that we cannot yet ascertain whether they are threatened or not. This study provides a baseline assessment from which trends in the status of plant biodiversity can be measured and periodically reassessed.