Aerobic Damage to [FeFe]-Hydrogenases: Activation Barriers for the Chemical Attachment of O2** 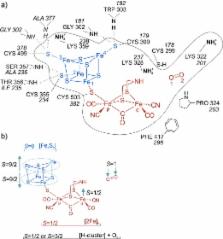 [FeFe]-hydrogenases are the best natural hydrogen-producing enzymes but their biotechnological exploitation is hampered by their extreme oxygen sensitivity. The free energy profile for the chemical attachment of O 2 to the enzyme active site was investigated by using a range-separated density functional re-parametrized to reproduce high-level ab initio data. An activation free-energy barrier of 13 kcal mol −1 was obtained for chemical bond formation between the di-iron active site and O 2, a value in good agreement with experimental inactivation rates. The oxygen binding can be viewed as an inner-sphere electron-transfer process that is strongly influenced by Coulombic interactions with the proximal cubane cluster and the protein environment. The implications of these results for future mutation studies with the aim of increasing the oxygen tolerance of this enzyme are discussed.

A.K. was supported by EPSRC grant EP/J015571/1 and D.D.S by EPSRC grant EP/J016764/1. R.B.B. was supported by the Intramural Research Program of the National Institute of Diabetes and Digestive and Kidney Diseases of the National Institutes of Health. J.B. thanks the Royal Society for a University Research Fellowship. This work was carried out on HECToR (Edinburgh), access to which was granted through the Materials Chemistry Consortium (EPSRC grants EP/F067496 and EP/L000202). We thank Christophe Léger for critical reading of the manuscript.