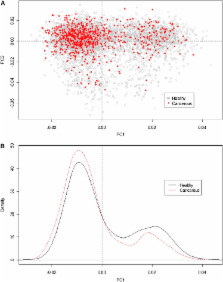 Prediction of genetic risk for disease is needed for preventive and personalized medicine. Genome-wide association studies have found unprecedented numbers of variants associated with complex human traits and diseases. However, these variants explain only a small proportion of genetic risk. Mounting evidence suggests that many traits, relevant to public health, are affected by large numbers of small-effect genes and that prediction of genetic risk to those traits and diseases could be improved by incorporating large numbers of markers into whole-genome prediction (WGP) models. We developed a WGP model incorporating thousands of markers for prediction of skin cancer risk in humans. We also considered other ways of incorporating genetic information into prediction models, such as family history or ancestry (using principal components, PCs, of informative markers). Prediction accuracy was evaluated using the area under the receiver operating characteristic curve (AUC) estimated in a cross-validation. Incorporation of genetic information ( i.e., familial relationships, PCs, or WGP) yielded a significant increase in prediction accuracy: from an AUC of 0.53 for a baseline model that accounted for nongenetic covariates to AUCs of 0.58 (pedigree), 0.62 (PCs), and 0.64 (WGP). In summary, prediction of skin cancer risk could be improved by considering genetic information and using a large number of single-nucleotide polymorphisms (SNPs) in a WGP model, which allows for the detection of patterns of genetic risk that are above and beyond those that can be captured using family history. We discuss avenues for improving prediction accuracy and speculate on the possible use of WGP to prospectively identify individuals at high risk.

Eric S. Lander,  N Schork (1994)
Medical genetics was revolutionized during the 1980s by the application of genetic mapping to locate the genes responsible for simple Mendelian diseases. Most diseases and traits, however, do not follow simple inheritance patterns. Genetics have thus begun taking up the even greater challenge of the genetic dissection of complex traits. Four major approaches have been developed: linkage analysis, allele-sharing methods, association studies, and polygenic analysis of experimental crosses. This article synthesizes the current state of the genetic dissection of complex traits--describing the methods, limitations, and recent applications to biological problems.

Heather B. Hayes,  Michael E Goddard (2007)
Genomic selection is a form of marker-assisted selection in which genetic markers covering the whole genome are used so that all quantitative trait loci (QTL) are in linkage disequilibrium with at least one marker. This approach has become feasible thanks to the large number of single nucleotide polymorphisms (SNP) discovered by genome sequencing and new methods to efficiently genotype large number of SNP. Simulation results and limited experimental results suggest that breeding values can be predicted with high accuracy using genetic markers alone but more validation is required especially in samples of the population different from that in which the effect of the markers was estimated. The ideal method to estimate the breeding value from genomic data is to calculate the conditional mean of the breeding value given the genotype of the animal at each QTL. This conditional mean can only be calculated by using a prior distribution of QTL effects so this should be part of the research carried out to implement genomic selection. In practice, this method of estimating breeding values is approximated by using the marker genotypes instead of the QTL genotypes but the ideal method is likely to be approached more closely as more sequence and SNP data is obtained. Implementation of genomic selection is likely to have major implications for genetic evaluation systems and for genetic improvement programmes generally and these are discussed.