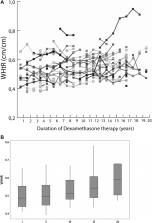 Journal: Journal of the Endocrine Society

No consensus has been reached regarding the glucocorticoid (GC) to use for congenital adrenal hyperplasia (CAH) during adulthood. Dexamethasone (DEX), because of its longer half-life, could improve compliance; however, no data are available regarding the long-term effects of DEX therapy.

To analyze the metabolic effect of DEX therapy for adults with CAH.

Clinical, laboratory, and metabolic data were compared immediately before DEX and at the last evaluation.

Long-term and low-dose DEX therapy did not lead to increases in obesity or metabolic syndrome, although it was associated with an increased WtHR and greater homeostatic model assessment for insulin resistance observed with chronic use of GCs. DEX appears to be an acceptable option to treat adult CAH.

This article has been published under the terms of the Creative Commons Attribution Non-Commercial, No-Derivatives License (CC BY-NC-ND; https://creativecommons.org/licenses/by-nc-nd/4.0/).