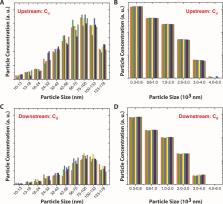 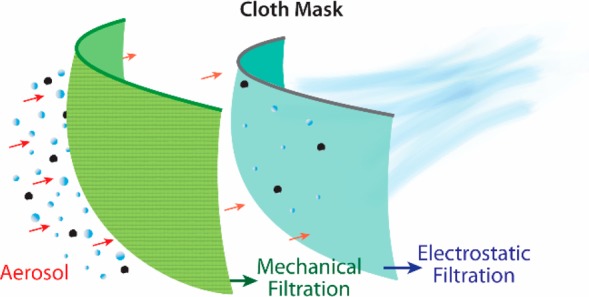 The emergence of a pandemic affecting the respiratory system can result in a significant demand for face masks. This includes the use of cloth masks by large sections of the public, as can be seen during the current global spread of COVID-19. However, there is limited knowledge available on the performance of various commonly available fabrics used in cloth masks. Importantly, there is a need to evaluate filtration efficiencies as a function of aerosol particulate sizes in the 10 nm to 10 μm range, which is particularly relevant for respiratory virus transmission. We have carried out these studies for several common fabrics including cotton, silk, chiffon, flannel, various synthetics, and their combinations. Although the filtration efficiencies for various fabrics when a single layer was used ranged from 5 to 80% and 5 to 95% for particle sizes of <300 nm and >300 nm, respectively, the efficiencies improved when multiple layers were used and when using a specific combination of different fabrics. Filtration efficiencies of the hybrids (such as cotton–silk, cotton–chiffon, cotton–flannel) was >80% (for particles <300 nm) and >90% (for particles >300 nm). We speculate that the enhanced performance of the hybrids is likely due to the combined effect of mechanical and electrostatic-based filtration. Cotton, the most widely used material for cloth masks performs better at higher weave densities ( i.e., thread count) and can make a significant difference in filtration efficiencies. Our studies also imply that gaps (as caused by an improper fit of the mask) can result in over a 60% decrease in the filtration efficiency, implying the need for future cloth mask design studies to take into account issues of “fit” and leakage, while allowing the exhaled air to vent efficiently. Overall, we find that combinations of various commonly available fabrics used in cloth masks can potentially provide significant protection against the transmission of aerosol particles.

Neeltje van Doremalen,  Trenton Bushmaker,  Dylan H Morris … (2020)
To the Editor: A novel human coronavirus that is now named severe acute respiratory syndrome coronavirus 2 (SARS-CoV-2) (formerly called HCoV-19) emerged in Wuhan, China, in late 2019 and is now causing a pandemic. 1 We analyzed the aerosol and surface stability of SARS-CoV-2 and compared it with SARS-CoV-1, the most closely related human coronavirus. 2 We evaluated the stability of SARS-CoV-2 and SARS-CoV-1 in aerosols and on various surfaces and estimated their decay rates using a Bayesian regression model (see the Methods section in the Supplementary Appendix, available with the full text of this letter at NEJM.org). SARS-CoV-2 nCoV-WA1-2020 (MN985325.1) and SARS-CoV-1 Tor2 (AY274119.3) were the strains used. Aerosols (<5 μm) containing SARS-CoV-2 (105.25 50% tissue-culture infectious dose [TCID50] per milliliter) or SARS-CoV-1 (106.75-7.00 TCID50 per milliliter) were generated with the use of a three-jet Collison nebulizer and fed into a Goldberg drum to create an aerosolized environment. The inoculum resulted in cycle-threshold values between 20 and 22, similar to those observed in samples obtained from the upper and lower respiratory tract in humans. Our data consisted of 10 experimental conditions involving two viruses (SARS-CoV-2 and SARS-CoV-1) in five environmental conditions (aerosols, plastic, stainless steel, copper, and cardboard). All experimental measurements are reported as means across three replicates. SARS-CoV-2 remained viable in aerosols throughout the duration of our experiment (3 hours), with a reduction in infectious titer from 103.5 to 102.7 TCID50 per liter of air. This reduction was similar to that observed with SARS-CoV-1, from 104.3 to 103.5 TCID50 per milliliter (Figure 1A). SARS-CoV-2 was more stable on plastic and stainless steel than on copper and cardboard, and viable virus was detected up to 72 hours after application to these surfaces (Figure 1A), although the virus titer was greatly reduced (from 103.7 to 100.6 TCID50 per milliliter of medium after 72 hours on plastic and from 103.7 to 100.6 TCID50 per milliliter after 48 hours on stainless steel). The stability kinetics of SARS-CoV-1 were similar (from 103.4 to 100.7 TCID50 per milliliter after 72 hours on plastic and from 103.6 to 100.6 TCID50 per milliliter after 48 hours on stainless steel). On copper, no viable SARS-CoV-2 was measured after 4 hours and no viable SARS-CoV-1 was measured after 8 hours. On cardboard, no viable SARS-CoV-2 was measured after 24 hours and no viable SARS-CoV-1 was measured after 8 hours (Figure 1A). Both viruses had an exponential decay in virus titer across all experimental conditions, as indicated by a linear decrease in the log10TCID50 per liter of air or milliliter of medium over time (Figure 1B). The half-lives of SARS-CoV-2 and SARS-CoV-1 were similar in aerosols, with median estimates of approximately 1.1 to 1.2 hours and 95% credible intervals of 0.64 to 2.64 for SARS-CoV-2 and 0.78 to 2.43 for SARS-CoV-1 (Figure 1C, and Table S1 in the Supplementary Appendix). The half-lives of the two viruses were also similar on copper. On cardboard, the half-life of SARS-CoV-2 was longer than that of SARS-CoV-1. The longest viability of both viruses was on stainless steel and plastic; the estimated median half-life of SARS-CoV-2 was approximately 5.6 hours on stainless steel and 6.8 hours on plastic (Figure 1C). Estimated differences in the half-lives of the two viruses were small except for those on cardboard (Figure 1C). Individual replicate data were noticeably “noisier” (i.e., there was more variation in the experiment, resulting in a larger standard error) for cardboard than for other surfaces (Fig. S1 through S5), so we advise caution in interpreting this result. We found that the stability of SARS-CoV-2 was similar to that of SARS-CoV-1 under the experimental circumstances tested. This indicates that differences in the epidemiologic characteristics of these viruses probably arise from other factors, including high viral loads in the upper respiratory tract and the potential for persons infected with SARS-CoV-2 to shed and transmit the virus while asymptomatic. 3,4 Our results indicate that aerosol and fomite transmission of SARS-CoV-2 is plausible, since the virus can remain viable and infectious in aerosols for hours and on surfaces up to days (depending on the inoculum shed). These findings echo those with SARS-CoV-1, in which these forms of transmission were associated with nosocomial spread and super-spreading events, 5 and they provide information for pandemic mitigation efforts.

Airborne transmission of SARS-CoV-2: the world should face the reality

Lidia Morawska,  Junji Cao (2020)
Hand washing and maintaining social distance are the main measures recommended by the World Health Organization (WHO) to avoid contracting COVID-19. Unfortunately, these measured do not prevent infection by inhalation of small droplets exhaled by an infected person that can travel distance of meters or tens of meters in the air and carry their viral content. Science explains the mechanisms of such transport and there is evidence that this is a significant route of infection in indoor environments. Despite this, no countries or authorities consider airborne spread of COVID-19 in their regulations to prevent infections transmission indoors. It is therefore extremely important, that the national authorities acknowledge the reality that the virus spreads through air, and recommend that adequate control measures be implemented to prevent further spread of the SARS-CoV-2 virus, in particularly removal of the virus-laden droplets from indoor air by ventilation.

This article is made available via the PMC Open Access Subset for unrestricted RESEARCH re-use and analyses in any form or by any means with acknowledgement of the original source. These permissions are granted for the duration of the World Health Organization (WHO) declaration of COVID-19 as a global pandemic.