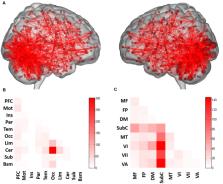 N. Tzourio-Mazoyer,  B Landeau,  D Papathanassiou … (2002)
An anatomical parcellation of the spatially normalized single-subject high-resolution T1 volume provided by the Montreal Neurological Institute (MNI) (D. L. Collins et al., 1998, Trans. Med. Imag. 17, 463-468) was performed. The MNI single-subject main sulci were first delineated and further used as landmarks for the 3D definition of 45 anatomical volumes of interest (AVOI) in each hemisphere. This procedure was performed using a dedicated software which allowed a 3D following of the sulci course on the edited brain. Regions of interest were then drawn manually with the same software every 2 mm on the axial slices of the high-resolution MNI single subject. The 90 AVOI were reconstructed and assigned a label. Using this parcellation method, three procedures to perform the automated anatomical labeling of functional studies are proposed: (1) labeling of an extremum defined by a set of coordinates, (2) percentage of voxels belonging to each of the AVOI intersected by a sphere centered by a set of coordinates, and (3) percentage of voxels belonging to each of the AVOI intersected by an activated cluster. An interface with the Statistical Parametric Mapping package (SPM, J. Ashburner and K. J. Friston, 1999, Hum. Brain Mapp. 7, 254-266) is provided as a freeware to researchers of the neuroimaging community. We believe that this tool is an improvement for the macroscopical labeling of activated area compared to labeling assessed using the Talairach atlas brain in which deformations are well known. However, this tool does not alleviate the need for more sophisticated labeling strategies based on anatomical or cytoarchitectonic probabilistic maps.

Scott L Rauch,  Lisa Shin,  Charles E. Phelps (2006)
The prevailing neurocircuitry models of anxiety disorders have been amygdalocentric in form. The bases for such models have progressed from theoretical considerations, extrapolated from research in animals, to in vivo human imaging data. For example, one current model of posttraumatic stress disorder (PTSD) has been highly influenced by knowledge from rodent fear conditioning research. Given the phenomenological parallels between fear conditioning and the pathogenesis of PTSD, we have proposed that PTSD is characterized by exaggerated amygdala responses (subserving exaggerated acquisition of fear associations and expression of fear responses) and deficient frontal cortical function (mediating deficits in extinction and the capacity to suppress attention/response to trauma-related stimuli), as well as deficient hippocampal function (mediating deficits in appreciation of safe contexts and explicit learning/memory). Neuroimaging studies have yielded convergent findings in support of this model. However, to date, neuroimaging investigations of PTSD have not principally employed conditioning and extinction paradigms per se. The recent development of such imaging probes now sets the stage for directly testing hypotheses regarding the neural substrates of fear conditioning and extinction abnormalities in PTSD.

A neuromarker of sustained attention from whole-brain functional connectivity

Monica Rosenberg,  Emily Finn,  Dustin Scheinost … (2015)
Although attention plays a ubiquitous role in perception and cognition, researchers lack a simple way to measure a person’s overall attentional abilities. Because behavioral measures are diverse and difficult to standardize, we pursued a neuromarker of an important aspect of attention, sustained attention, using functional magnetic resonance imaging. To this end, we identified functional brain networks whose strength during a sustained attention task predicted individual differences in performance. Models based on these networks generalized to previously unseen individuals, even predicting performance from resting-state connectivity alone. Furthermore, these same models predicted a clinical measure of attention—symptoms of attention deficit hyperactivity disorder—from resting-state connectivity in an independent sample of children and adolescents. These results demonstrate that whole-brain functional network strength provides a broadly applicable neuromarker of sustained attention.

Specialty section: This article was submitted to Pathological Conditions, a section of the journal Frontiers in Behavioral Neuroscience