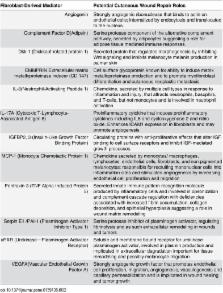 Our data suggest that melanocytes respond to dermal fibroblast-derived mediators independent of keratinocytes and raise the possibility that mesenchymal-epidermal interactions influence skin pigmentation during cutaneous scarring.

Geoffrey N. Box,  Peter R Teasdale,  Nancy R. Sturm (2001)
The synthesis of the visible pigment melanin by the melanocyte cell is the basis of the human pigmentary system, those genes directing the formation, transport and distribution of the specialised melanosome organelle in which melanin accumulates can legitimately be called pigmentation genes. The genes involved in this process have been identified through comparative genomic studies of mouse coat colour mutations and by the molecular characterisation of human hypopigmentary genetic diseases such as OCA1 and OCA2. The melanocyte responds to the peptide hormones alpha-MSH or ACTH through the MC1R G-protein coupled receptor to stimulate melanin production through induced maturation or switching of melanin type. The pheomelanosome, containing the key enzyme of the pathway tyrosinase, produces light red/yellowish melanin, whereas the eumelanosome produces darker melanins via induction of additional TYRP1, TYRP2, SILV enzymes, and the P-protein. Intramelanosomal pH governed by the P-protein may act as a critical determinant of tyrosinase enzyme activity to control the initial step in melanin synthesis or TYRP complex formation to facilitate melanogenesis and melanosomal maturation. The search for genetic variation in these candidate human pigmentation genes in various human populations has revealed high levels of polymorphism in the MC1R locus, with over 30 variant alleles so far identified. Functional correlation of MC1R alleles with skin and hair colour provides evidence that this receptor molecule is a principle component underlying normal human pigment variation.

Melanosomes are transferred from melanocytes to keratinocytes through the processes of packaging, release, uptake, and dispersion.

Hideya Ando,  Yoko Niki,  Masaaki Ito … (2012)
Recent studies have described the role of shedding vesicles as physiological conveyers of intracellular components between neighboring cells. Here we report that melanosomes are one example of shedding vesicle cargo, but are processed by a previously unreported mechanism. Pigment globules were observed to be connected to the filopodia of melanocyte dendrites, which have previously been shown to be conduits for melanosomes. Pigment globules containing multiple melanosomes were released from various areas of the dendrites of normal human melanocytes derived from darkly pigmented skin. The globules were then captured by the microvilli of normal human keratinocytes, also derived from darkly pigmented skin, which incorporated them in a protease-activated receptor-2 (PAR-2)-dependent manner. After the pigment globules were ingested by the keratinocytes, the membrane that surrounded each melanosome cluster was gradually degraded, and the individual melanosomes then spread into the cytosol and were distributed primarily in the perinuclear area of each keratinocyte. These results suggest a melanosome transfer pathway wherein melanosomes are transferred from melanocytes to keratinocytes via the shedding vesicle system. This packaging system generates pigment globules containing multiple melanosomes in a unique manner.

Direct migration of follicular melanocyte stem cells to the epidermis after wounding or UVB irradiation is dependent on Mc1r signaling.

Wei Chou,  Makoto Takeo,  Piul Rabbani … (2013)
During wound healing, stem cells provide functional mature cells to meet acute demands for tissue regeneration. Simultaneously, the tissue must maintain a pool of stem cells to sustain its future regeneration capability. However, how these requirements are balanced in response to injury is unknown. Here we demonstrate that after wounding or ultraviolet type B irradiation, melanocyte stem cells (McSCs) in the hair follicle exit the stem cell niche before their initial cell division, potentially depleting the pool of these cells. We also found that McSCs migrate to the epidermis in a melanocortin 1 receptor (Mc1r)-dependent manner and differentiate into functional epidermal melanocytes, providing a pigmented protective barrier against ultraviolet irradiation over the damaged skin. These findings provide an example in which stem cell differentiation due to injury takes precedence over stem cell maintenance and show the potential for developing therapies for skin pigmentation disorders by manipulating McSCs.