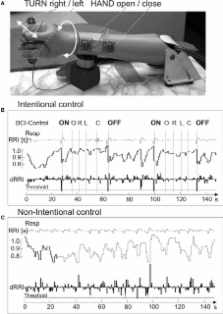 Nowadays, everybody knows what a hybrid car is. A hybrid car normally has two engines to enhance energy efficiency and reduce CO2 output. Similarly, a hybrid brain-computer interface (BCI) is composed of two BCIs, or at least one BCI and another system. A hybrid BCI, like any BCI, must fulfill the following four criteria: (i) the device must rely on signals recorded directly from the brain; (ii) there must be at least one recordable brain signal that the user can intentionally modulate to effect goal-directed behaviour; (iii) real time processing; and (iv) the user must obtain feedback. This paper introduces hybrid BCIs that have already been published or are in development. We also introduce concepts for future work. We describe BCIs that classify two EEG patterns: one is the event-related (de)synchronisation (ERD, ERS) of sensorimotor rhythms, and the other is the steady-state visual evoked potential (SSVEP). Hybrid BCIs can either process their inputs simultaneously, or operate two systems sequentially, where the first system can act as a “brain switch”. For example, we describe a hybrid BCI that simultaneously combines ERD and SSVEP BCIs. We also describe a sequential hybrid BCI, in which subjects could use a brain switch to control an SSVEP-based hand orthosis. Subjects who used this hybrid BCI exhibited about half the false positives encountered while using the SSVEP BCI alone. A brain switch can also rely on hemodynamic changes measured through near-infrared spectroscopy (NIRS). Hybrid BCIs can also use one brain signal and a different type of input. This additional input can be an electrophysiological signal such as the heart rate, or a signal from an external device such as an eye tracking system.

A spelling device for the paralysed.

Brain-computer interfaces: communication and restoration of movement in paralysis.

Niels Birbaumer,  Leonardo Cohen (2007)
The review describes the status of brain-computer or brain-machine interface research. We focus on non-invasive brain-computer interfaces (BCIs) and their clinical utility for direct brain communication in paralysis and motor restoration in stroke. A large gap between the promises of invasive animal and human BCI preparations and the clinical reality characterizes the literature: while intact monkeys learn to execute more or less complex upper limb movements with spike patterns from motor brain regions alone without concomitant peripheral motor activity usually after extensive training, clinical applications in human diseases such as amyotrophic lateral sclerosis and paralysis from stroke or spinal cord lesions show only limited success, with the exception of verbal communication in paralysed and locked-in patients. BCIs based on electroencephalographic potentials or oscillations are ready to undergo large clinical studies and commercial production as an adjunct or a major assisted communication device for paralysed and locked-in patients. However, attempts to train completely locked-in patients with BCI communication after entering the complete locked-in state with no remaining eye movement failed. We propose that a lack of contingencies between goal directed thoughts and intentions may be at the heart of this problem. Experiments with chronically curarized rats support our hypothesis; operant conditioning and voluntary control of autonomic physiological functions turned out to be impossible in this preparation. In addition to assisted communication, BCIs consisting of operant learning of EEG slow cortical potentials and sensorimotor rhythm were demonstrated to be successful in drug resistant focal epilepsy and attention deficit disorder. First studies of non-invasive BCIs using sensorimotor rhythm of the EEG and MEG in restoration of paralysed hand movements in chronic stroke and single cases of high spinal cord lesions show some promise, but need extensive evaluation in well-controlled experiments. Invasive BMIs based on neuronal spike patterns, local field potentials or electrocorticogram may constitute the strategy of choice in severe cases of stroke and spinal cord paralysis. Future directions of BCI research should include the regulation of brain metabolism and blood flow and electrical and magnetic stimulation of the human brain (invasive and non-invasive). A series of studies using BOLD response regulation with functional magnetic resonance imaging (fMRI) and near infrared spectroscopy demonstrated a tight correlation between voluntary changes in brain metabolism and behaviour.

Susette Coyle,  C Markham,  T Ward (2007)
A brain-computer interface (BCI) is a device that allows a user to communicate with external devices through thought processes alone. A novel signal acquisition tool for BCIs is near-infrared spectroscopy (NIRS), an optical technique to measure localized cortical brain activity. The benefits of using this non-invasive modality are safety, portability and accessibility. A number of commercial multi-channel NIRS system are available; however we have developed a straightforward custom-built system to investigate the functionality of a fNIRS-BCI system. This work describes the construction of the device, the principles of operation and the implementation of a fNIRS-BCI application, 'Mindswitch' that harnesses motor imagery for control. Analysis is performed online and feedback of performance is presented to the user. Mindswitch presents a basic 'on/off' switching option to the user, where selection of either state takes 1 min. Initial results show that fNIRS can support simple BCI functionality and shows much potential. Although performance may be currently inferior to many EEG systems, there is much scope for development particularly with more sophisticated signal processing and classification techniques. We hope that by presenting fNIRS as an accessible and affordable option, a new avenue of exploration will open within the BCI research community and stimulate further research in fNIRS-BCIs.