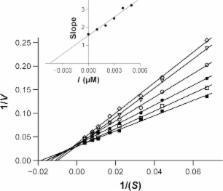 The present study examines the monoamine oxidase (MAO) inhibitory properties of a series of 20 3-coumaranone [benzofuran-3(2 H)-one] derivatives. The 3-coumaranone derivatives are structurally related to series of α-tetralone and 1-indanone derivatives, which have recently been shown to potently inhibit MAO, with selectivity for MAO-B (in preference to the MAO-A isoform). 3-Coumaranones are similarly found to selectively inhibit human MAO-B with half-maximal inhibitory concentration (IC 50) values of 0.004–1.05 µM. Nine compounds exhibited IC 50<0.05 µM for the inhibition of MAO-B. For the inhibition of human MAO-A, IC 50 values ranged from 0.586 to >100 µM, with only one compound possessing an IC 50<1 µM. For selected 3-coumaranone derivatives, it is established that MAO-A and MAO-B inhibition are reversible since dialysis of enzyme–inhibitor mixtures almost completely restores enzyme activity. On the basis of the selectivity profiles and potent action, it may be concluded that the 3-coumaranone derivatives are suitable leads for the development of selective MAO-B inhibitors as potential treatment for disorders such as Parkinson’s disease and Alzheimer’s disease.

M. B. H. Youdim,  Y Bakhle (2005)
A few years after the foundation of the British Pharmacological Society, monoamine oxidase (MAO) was recognized as an enzyme of crucial interest to pharmacologists because it catalyzed the major inactivation pathway for the catecholamine neurotransmitters, noradrenaline, adrenaline and dopamine (and, later, 5-hydroxytryptamine, as well). Within the next decade, the therapeutic value of inhibitors of MAO in the treatment of depressive illness was established. Although this first clinical use exposed serious side effects, pharmacological interest in, and investigation of, MAO continued, resulting in the characterization of two isoforms, MAO-A and -B, and isoform-selective inhibitors. Selective inhibitors of MAO-B have found a therapeutic role in the treatment of Parkinson's disease and further developments have provided reversible inhibitors of MAO-A, which offer antidepressant activity without the serious side effects of the earlier inhibitors. Clinical observation and subsequent pharmacological analysis have also generated the concept of neuroprotection, reflecting the possibility of slowing, halting and maybe reversing, neurodegeneration in Parkinson's or Alzheimer's diseases. Increased levels of oxidative stress in the brain may be critical for the initiation and progress of neurodegeneration and selective inhibition of brain MAO could contribute importantly to lowering such stress. There are complex interactions between free iron levels in brain and MAO, which may have practical outcomes for depressive disorders. These aspects of MAO and its inhibition and some indication of how this important area of pharmacology and therapeutics might develop in the future are summarized in this review.

Monoamine oxidases as sources of oxidants in the heart.

Nazareno Paolocci,  Nina Kaludercic,  Fabio Di Lisa … (2014)
Oxidative stress can be generated at several sites within the mitochondria. Among these, monoamine oxidase (MAO) has been described as a prominent source. MAOs are mitochondrial flavoenzymes responsible for the oxidative deamination of catecholamines, serotonin and biogenic amines, and during this process they generate H2O2 and aldehyde intermediates. The role of MAO in cardiovascular pathophysiology has only recently gathered some attention since it has been demonstrated that both H2O2 and aldehydes may target mitochondrial function and consequently affect function and viability of the myocardium. In the present review, we will discuss the role of MAO in catecholamine and serotonin clearance and cycling in relation to cardiac structure and function. The relevant contribution of each MAO isoform (MAO-A or -B) will be discussed in relation to mitochondrial dysfunction and myocardial injury. Finally, we will examine both beneficial effects of their pharmacological or genetic inhibition along with potential adverse effects observed at baseline in MAO knockout mice, as well as the deleterious effects following their over-expression specifically at cardiomyocyte level. This article is part of a Special Issue entitled "Redox Signalling in the Cardiovascular System". Copyright © 2014 Elsevier Ltd. All rights reserved.

cDNA cloning of human liver monoamine oxidase A and B: molecular basis of differences in enzymatic properties.

Guy C. J. Abell,  N. Lan,  Michael Bembenek … (1988)
The monoamine oxidases play a vital role in the metabolism of biogenic amines in the central nervous system and in peripheral tissues. Using oligonucleotide probes derived from three sequenced peptide fragments, we have isolated cDNA clones that encode the A and B forms of monoamine oxidase and have determined the nucleotide sequences of these cDNAs. Comparison of the deduced amino acid sequences shows that the A and B forms have subunit molecular weights of 59,700 and 58,800, respectively, and have 70% sequence identity. Both sequences contain the pentapeptide Ser-Gly-Gly-Cys-Tyr, in which the obligatory cofactor FAD is covalently bound to cysteine. Based on differences in primary amino acid sequences and RNA gel blot analysis of mRNAs, the A and B forms of monoamine oxidase appear to be derived from separate genes.