Genotypic Frequencies at Equilibrium for Polysomic Inheritance Under Double-Reduction 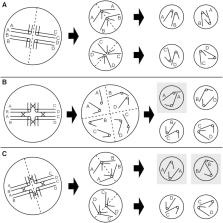 Polyploids are organisms whose genomes consist of more than two complete sets of chromosomes. Both autopolyploids and allopolyploids may display polysomic inheritance. A peculiarity of polysomic inheritance is multivalent formation during meiosis resulting in double-reduction, which occurs when sister chromatid fragments segregate into the same gamete. Double-reduction can result in gametes carrying identical-by-descent alleles and slightly increasing homozygosity. This will cause the genotypic frequencies to deviate from expected values and will thus bias the results of standard population genetic analytical methods used in molecular ecology and selective breeding. In this study, we extend existing double-reduction models to account for any even level of ploidy, and derive the symbolic expressions for genotypic frequencies via two methods. Inbreeding coefficients and heterozygosity under double-reduction and inbreeding are also calculated. Numerical solutions obtained by computer simulations are compared with analytical solutions predicted by the model to validate the model.

T. C. Marshall,  J Slate,  L. E. B. Kruuk … (1998)
Paternity inference using highly polymorphic codominant markers is becoming common in the study of natural populations. However, multiple males are often found to be genetically compatible with each offspring tested, even when the probability of excluding an unrelated male is high. While various methods exist for evaluating the likelihood of paternity of each nonexcluded male, interpreting these likelihoods has hitherto been difficult, and no method takes account of the incomplete sampling and error-prone genetic data typical of large-scale studies of natural systems. We derive likelihood ratios for paternity inference with codominant markers taking account of typing error, and define a statistic delta for resolving paternity. Using allele frequencies from the study population in question, a simulation program generates criteria for delta that permit assignment of paternity to the most likely male with a known level of statistical confidence. The simulation takes account of the number of candidate males, the proportion of males that are sampled and gaps and errors in genetic data. We explore the potentially confounding effect of relatives and show that the method is robust to their presence under commonly encountered conditions. The method is demonstrated using genetic data from the intensively studied red deer (Cervus elaphus) population on the island of Rum, Scotland. The Windows-based computer program, CERVUS, described in this study is available from the authors. CERVUS can be used to calculate allele frequencies, run simulations and perform parentage analysis using data from all types of codominant markers.

Adam Session,  Yoshinobu Uno,  Taejoon Kwon … (2016)
To explore the origins and consequences of tetraploidy in the African clawed frog, we sequenced the Xenopus laevis genome and compared it to the related diploid X. tropicalis genome. We demonstrate the allotetraploid origin of X. laevis by partitioning its genome into two homeologous subgenomes, marked by distinct families of “fossil” transposable elements. Based on the activity of these elements and the age of hundreds of unitary pseudogenes, we estimate that the two diploid progenitor species diverged ~34 million years ago (Mya) and combined to form an allotetraploid ~17–18 Mya. 56% of all genes are retained in two homeologous copies. Protein function, gene expression, and the amount of flanking conserved sequence all correlate with retention rates. The subgenomes have evolved asymmetrically, with one chromosome set more often preserving the ancestral state and the other experiencing more gene loss, deletion, rearrangement, and reduced gene expression.

F-statistics and analysis of gene diversity in subdivided populations.

M Nei (1977)
It is show that Wright's F-statistics can be defined as ratios of gene diversities of heterozygosities rather than as the correlations of uniting gametes. This definition is applicable irrespective of the number of alleles involved or whether there is selection or not. The relationship between F-statistics and Nei's gene diversity analysis is discussed.