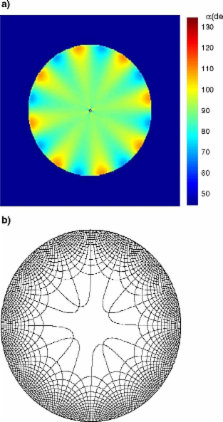 The paper presents a novel and more generalized concept for spatial encoding by non-unidirectional, non- bijective spatial encoding magnetic fields (SEMs). In combination with parallel local receiver coils these fields allow one to overcome the current limitations of neuronal nerve stimulation. Additionally the geometry of such fields can be adapted to anatomy.

As an example of such a parallel imaging technique using localized gradients (PatLoc)- system, we present a polar gradient system consisting of 2 × 8 rectangular current loops in octagonal arrangement, which generates a radial magnetic field gradient. By inverting the direction of current in alternating loops, a near sinusoidal field variation in the circumferential direction is produced. Ambiguities in spatial assignment are resolved by use of multiple receiver coils and parallel reconstruction. Simulations demonstrate the potential advantages and limitations of this approach.

The exact behaviour of PatLoc fields with respect to peripheral nerve stimulation needs to be tested in practice. Based on geometrical considerations SEMs of radial geometry allow for about three times faster gradient switching compared to conventional head gradient inserts and even more compared to whole body gradients. The strong nonlinear geometry of the fields needs to be considered for practical applications.

Mark Griswold,  Berthold Kiefer,  Robin Heidemann … (2002)
In this study, a novel partially parallel acquisition (PPA) method is presented which can be used to accelerate image acquisition using an RF coil array for spatial encoding. This technique, GeneRalized Autocalibrating Partially Parallel Acquisitions (GRAPPA) is an extension of both the PILS and VD-AUTO-SMASH reconstruction techniques. As in those previous methods, a detailed, highly accurate RF field map is not needed prior to reconstruction in GRAPPA. This information is obtained from several k-space lines which are acquired in addition to the normal image acquisition. As in PILS, the GRAPPA reconstruction algorithm provides unaliased images from each component coil prior to image combination. This results in even higher SNR and better image quality since the steps of image reconstruction and image combination are performed in separate steps. After introducing the GRAPPA technique, primary focus is given to issues related to the practical implementation of GRAPPA, including the reconstruction algorithm as well as analysis of SNR in the resulting images. Finally, in vivo GRAPPA images are shown which demonstrate the utility of the technique. Copyright 2002 Wiley-Liss, Inc.

Klaas Pruessmann,  Markus Weiger,  Markus Scheidegger … (1999)
New theoretical and practical concepts are presented for considerably enhancing the performance of magnetic resonance imaging (MRI) by means of arrays of multiple receiver coils. Sensitivity encoding (SENSE) is based on the fact that receiver sensitivity generally has an encoding effect complementary to Fourier preparation by linear field gradients. Thus, by using multiple receiver coils in parallel scan time in Fourier imaging can be considerably reduced. The problem of image reconstruction from sensitivity encoded data is formulated in a general fashion and solved for arbitrary coil configurations and k-space sampling patterns. Special attention is given to the currently most practical case, namely, sampling a common Cartesian grid with reduced density. For this case the feasibility of the proposed methods was verified both in vitro and in vivo. Scan time was reduced to one-half using a two-coil array in brain imaging. With an array of five coils double-oblique heart images were obtained in one-third of conventional scan time. Magn Reson Med 42:952-962, 1999. Copyright 1999 Wiley-Liss, Inc.