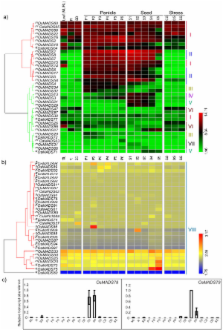 MADS-box transcription factors, besides being involved in floral organ specification, have also been implicated in several aspects of plant growth and development. In recent years, there have been reports on genomic localization, protein motif structure, phylogenetic relationships, gene structure and expression of the entire MADS-box family in the model plant system, Arabidopsis. Though there have been some studies in rice as well, an analysis of the complete MADS-box family along with a comprehensive expression profiling was still awaited after the completion of rice genome sequencing. Furthermore, owing to the role of MADS-box family in flower development, an analysis involving structure, expression and functional aspects of MADS-box genes in rice and Arabidopsis was required to understand the role of this gene family in reproductive development.

A genome-wide molecular characterization and microarray-based expression profiling of the genes encoding MADS-box transcription factor family in rice is presented. Using a thorough annotation exercise, 75 MADS-box genes have been identified in rice and categorized into MIKC c, MIKC*, Mα, Mβ and Mγ groups based on phylogeny. Chromosomal localization of these genes reveals that 16 MADS-box genes, mostly MIKC c-type, are located within the duplicated segments of the rice genome, whereas most of the M-type genes, 20 in all, seem to have resulted from tandem duplications. Nine members belonging to the Mβ group, which was considered absent in monocots, have also been identified. The expression profiles of all the MADS-box genes have been analyzed under 11 temporal stages of panicle and seed development, three abiotic stress conditions, along with three stages of vegetative development. Transcripts for 31 genes accumulate preferentially in the reproductive phase, of which, 12 genes are specifically expressed in seeds, and six genes show expression specific to panicle development. Differential expression of seven genes under stress conditions is also evident. An attempt has been made to gain insight into plausible functions of rice MADS-box genes by collating the expression data of functionally validated genes in rice and Arabidopsis.

Only a limited number of MADS genes have been functionally validated in rice. A comprehensive annotation and transcriptome profiling undertaken in this investigation adds to our understanding of the involvement of MADS-box family genes during reproductive development and stress in rice and also provides the basis for selection of candidate genes for functional validation studies.

Ancient polyploidization predating divergence of the cereals, and its consequences for comparative genomics.

Arlene Chapman,  Greig A. Paterson,  Roy Bowers (2004)
Integration of structural genomic data from a largely assembled rice genome sequence, with phylogenetic analysis of sequence samples for many other taxa, suggests that a polyploidization event occurred approximately 70 million years ago, before the divergence of the major cereals from one another but after the divergence of the Poales from the Liliales and Zingiberales. Ancient polyploidization and subsequent "diploidization" (loss) of many duplicated gene copies has thus shaped the genomes of all Poaceae cereal, forage, and biomass crops. The Poaceae appear to have evolved as separate lineages for approximately 50 million years, or two-thirds of the time since the duplication event. Chromosomes that are predicted to be homoeologs resulting from this ancient duplication event account for a disproportionate share of incongruent loci found by comparison of the rice sequence to a detailed sorghum sequence-tagged site-based genetic map. Differential gene loss during diploidization may have contributed many of these incongruities. Such predicted homoeologs also account for a disproportionate share of duplicated sorghum loci, further supporting the hypothesis that the polyploidization event was common to sorghum and rice. Comparative gene orders along paleo-homoeologous chromosomal segments provide a means to make phylogenetic inferences about chromosome structural rearrangements that differentiate among the grasses. Superimposition of the timing of major duplication events on taxonomic relationships leads to improved understanding of comparative gene orders, enhancing the value of data from botanical models for crop improvement and for further exploration of genomic biodiversity. Additional ancient duplication events probably remain to be discovered in other angiosperm lineages.