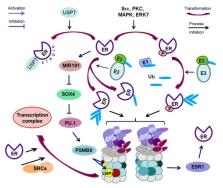 This review provides information on the structure of estrogen receptors (ERs), their localization and functions in mammalian cells. Additionally, the structure of proteasomes and mechanisms of protein ubiquitination and cleavage are described. According to the modern concept, the ubiquitin proteasome system (UPS) is involved in the regulation of the activity of ERs in several ways. First, UPS performs the ubiquitination of ERs with a change in their functional activity. Second, UPS degrades ERs and their transcriptional regulators. Third, UPS affects the expression of ER genes. In addition, the opportunity of the regulation of proteasome functioning by ERs—in particular, the expression of immune proteasomes—is discussed. Understanding the complex mechanisms underlying the regulation of ERs and proteasomes has great prospects for the development of new therapeutic agents that can make a significant contribution to the treatment of diseases associated with the impaired function of these biomolecules.

Avram Hershko,  Aaron Ciechanover (1998)
The selective degradation of many short-lived proteins in eukaryotic cells is carried out by the ubiquitin system. In this pathway, proteins are targeted for degradation by covalent ligation to ubiquitin, a highly conserved small protein. Ubiquitin-mediated degradation of regulatory proteins plays important roles in the control of numerous processes, including cell-cycle progression, signal transduction, transcriptional regulation, receptor down-regulation, and endocytosis. The ubiquitin system has been implicated in the immune response, development, and programmed cell death. Abnormalities in ubiquitin-mediated processes have been shown to cause pathological conditions, including malignant transformation. In this review we discuss recent information on functions and mechanisms of the ubiquitin system. Since the selectivity of protein degradation is determined mainly at the stage of ligation to ubiquitin, special attention is focused on what we know, and would like to know, about the mode of action of ubiquitin-protein ligation systems and about signals in proteins recognized by these systems.

Identity of an estrogen membrane receptor coupled to a G protein in human breast cancer cells.

E J Filardo,  J. Dong,  M. Thomas … (2005)
Although nonclassical estrogen actions initiated at the cell surface have been described in many tissues, the identities of the membrane estrogen receptors (mERs) mediating these actions remain unclear. Here we show that GPR30, an orphan receptor unrelated to nuclear estrogen receptors, has all the binding and signaling characteristics of a mER. A high-affinity (dissociation constant 2.7 nm), limited capacity, displaceable, single binding site specific for estrogens was detected in plasma membranes of SKBR3 breast cancer cells that express GPR30 but lack nuclear estrogen receptors. Progesterone-induced increases and small interfering RNA-induced decreases in GPR30 expression in SKBR3 cells were accompanied by parallel changes in specific estradiol-17beta (E2) binding. Plasma membranes of human embryonic kidney 293 cells transfected with GPR30, but not those of untransfected cells, and human placental tissues that express GPR30 also displayed high-affinity, specific estrogen binding typical of mERs. E2 treatment of transfected cell membranes caused activation of a stimulatory G protein that is directly coupled to the receptor, indicating GPR30 is a G protein-coupled receptor (GPCR), and also increased adenylyl cyclase activity. The finding that the antiestrogens tamoxifen and ICI 182,780, and an environmental estrogen, ortho,para-dichlorodiphenyldichloroethylene (o,p'-DDE), have high binding affinities to the receptor and mimic the actions of E2 has important implications for both the development and treatment of estrogen-dependent breast cancer. GPR30 is structurally unrelated to the recently discovered family of GPCR-like membrane progestin receptors. The identification of a second distinct class of GPCR-like steroid membrane receptors suggests a widespread role for GPCRs in nonclassical steroid hormone actions.

PEST sequences and regulation by proteolysis.

Martin Rechsteiner,  Scott W Rogers (1996)
In 1986, we proposed that polypeptide sequences enriched in proline (P), glutamic acid (E), serine (S) and threonine (T) target proteins for rapid destruction. For much of the past decade there were only sporadic experimental tests of the hypothesis. This situation changed markedly during the past two years with a number of papers providing strong evidence that PEST regions do, in fact, serve as proteolytic signals. Here, we briefly review the properties of PEST regions and some interesting examples of the conditional nature of such signals. Most of the article, however, focuses on recent experimental support for the hypothesis and on mechanisms responsible for the rapid degradation of proteins that contain PEST regions.