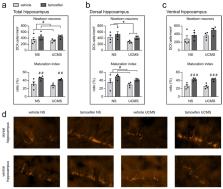 Many studies evaluated the functional role of adult hippocampal neurogenesis (AHN) and its key role in cognitive functions and mood regulation. The effects of promoting AHN on the recovery of stress-induced symptoms have been well studied, but its involvement in stress resilience remains elusive. We used a mouse model enabling us to foster AHN before the exposure to unpredictable chronic mild stress (UCMS) to evaluate the potential protective effects of AHN on stress, assessing the depressive-like phenotype and executive functions. For this purpose, an inducible transgenic mouse model was used to delete the pro-apoptotic gene Bax from neural progenitors four weeks before UCMS, whereby increasing the survival of adult-generated neurons. Our results showed that UCMS elicited a depressive-like phenotype, highlighted by a deteriorated coat state, a higher immobility duration in the tail suspension test (TST), and a delayed reversal learning in a water maze procedure. Promoting AHN before UCMS was sufficient to prevent the development of stressed-induced behavioral changes in the TST and the water maze, reflecting an effect of AHN on stress resilience. Taken together, our data suggest that increasing AHN promotes stress resilience on some depressive-like symptoms but also in cognitive symptoms, which are often observed in MD.

H. van Praag, G Kempermann, F H Gage (2000)
Neuronal plasticity is a central theme of modern neurobiology, from cellular and molecular mechanisms of synapse formation in Drosophila to behavioural recovery from strokes in elderly humans. Although the methods used to measure plastic responses differ, the stimuli required to elicit plasticity are thought to be activity-dependent. In this article, we focus on the neuronal changes that occur in response to complex stimulation by an enriched environment. We emphasize the behavioural and neurobiological consequences of specific elements of enrichment, especially exercise and learning.

Jason Snyder, Amélie Soumier, Michelle Brewer … (2011)
Summary Glucocorticoids are released in response to stressful experiences and serve many beneficial homeostatic functions. However, dysregulation of glucocorticoids is associated with cognitive impairments and depressive illness 1, 2 . In the hippocampus, a brain region densely populated with receptors for stress hormones, stress and glucocorticoids strongly inhibit adult neurogenesis 3 . Decreased neurogenesis has been implicated in the pathogenesis of anxiety and depression, but direct evidence for this role is lacking 4, 5 . Here we show that adult-born hippocampal neurons are required for normal expression of the endocrine and behavioral components of the stress response. Using transgenic and radiation methods to specifically inhibit adult neurogenesis, we find that glucocorticoid levels are slower to recover after moderate stress and are less suppressed by dexamethasone in neurogenesis-deficient mice compared with intact mice, consistent with a role for the hippocampus in regulation of the hypothalamic-pituitary-adrenal (HPA) axis 6, 7 . Relative to controls, neurogenesis-deficient mice showed increased food avoidance in a novel environment after acute stress, increased behavioral despair in the forced swim test, and decreased sucrose preference, a measure of anhedonia. These findings identify a small subset of neurons within the dentate gyrus that are critical for hippocampal negative control of the HPA axis and support a direct role for adult neurogenesis in depressive illness.

Neurogenesis-dependent and -independent effects of fluoxetine in an animal model of anxiety/depression.

Denis J. David, Benjamin Adam Samuels, Quentin Rainer … (2009)
Understanding the physiopathology of affective disorders and their treatment relies on the availability of experimental models that accurately mimic aspects of the disease. Here we describe a mouse model of an anxiety/depressive-like state induced by chronic corticosterone treatment. Furthermore, chronic antidepressant treatment reversed the behavioral dysfunctions and the inhibition of hippocampal neurogenesis induced by corticosterone treatment. In corticosterone-treated mice where hippocampal neurogenesis is abolished by X-irradiation, the efficacy of fluoxetine is blocked in some, but not all, behavioral paradigms, suggesting both neurogenesis-dependent and -independent mechanisms of antidepressant action. Finally, we identified a number of candidate genes, the expression of which is decreased by chronic corticosterone and normalized by chronic fluoxetine treatment selectively in the hypothalamus. Importantly, mice deficient in one of these genes, beta-arrestin 2, displayed a reduced response to fluoxetine in multiple tasks, suggesting that beta-arrestin signaling is necessary for the antidepressant effects of fluoxetine.