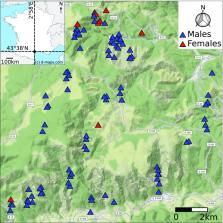 Gastro-intestinal nematodes, especially Haemonchus contortus, are widespread pathogenic parasites of small ruminants. Studying their spatial genetic structure is as important as studying host genetic structure to fully understand host-parasite interactions and transmission patterns. For parasites having a simple life cycle (e.g., monoxenous parasites), gene flow and spatial genetic structure are expected to strongly rely on the socio-spatial behavior of their hosts. Based on five microsatellite loci, we tested this hypothesis for H. contortus sampled in a wild Mediterranean mouflon population ( Ovis gmelini musimon ×  Ovis sp.) in which species- and environment-related characteristics have been found to generate socio-spatial units. We nevertheless found that their parasites had no spatial genetic structure, suggesting that mouflon behavior was not enough to limit parasite dispersal in this study area and/or that other ecological and biological factors were involved in this process, for example other hosts, the parasite life cycle, or the study area history.

adegenet: a R package for the multivariate analysis of genetic markers.

Thibaut Jombart (2008)
The package adegenet for the R software is dedicated to the multivariate analysis of genetic markers. It extends the ade4 package of multivariate methods by implementing formal classes and functions to manipulate and analyse genetic markers. Data can be imported from common population genetics software and exported to other software and R packages. adegenet also implements standard population genetics tools along with more original approaches for spatial genetics and hybridization. Stable version is available from CRAN: http://cran.r-project.org/mirrors.html. Development version is available from adegenet website: http://adegenet.r-forge.r-project.org/. Both versions can be installed directly from R. adegenet is distributed under the GNU General Public Licence (v.2).

Martial Dufour,  D. Pontier,  S. Devillard … (2008)
Increasing attention is being devoted to taking landscape information into account in genetic studies. Among landscape variables, space is often considered as one of the most important. To reveal spatial patterns, a statistical method should be spatially explicit, that is, it should directly take spatial information into account as a component of the adjusted model or of the optimized criterion. In this paper we propose a new spatially explicit multivariate method, spatial principal component analysis (sPCA), to investigate the spatial pattern of genetic variability using allelic frequency data of individuals or populations. This analysis does not require data to meet Hardy-Weinberg expectations or linkage equilibrium to exist between loci. The sPCA yields scores summarizing both the genetic variability and the spatial structure among individuals (or populations). Global structures (patches, clines and intermediates) are disentangled from local ones (strong genetic differences between neighbors) and from random noise. Two statistical tests are proposed to detect the existence of both types of patterns. As an illustration, the results of principal component analysis (PCA) and sPCA are compared using simulated datasets and real georeferenced microsatellite data of Scandinavian brown bear individuals (Ursus arctos). sPCA performed better than PCA to reveal spatial genetic patterns. The proposed methodology is implemented in the adegenet package of the free software R.