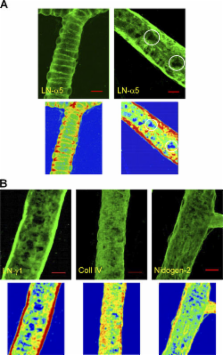 The mechanism of leukocyte migration through venular walls in vivo is largely unknown. By using immunofluorescence staining and confocal microscopy, the present study demonstrates the existence of regions within the walls of unstimulated murine cremasteric venules where expression of key vascular basement membrane (BM) constituents, laminin 10, collagen IV, and nidogen-2 (but not perlecan) are considerably lower (<60%) than the average expression detected in the same vessel. These sites were closely associated with gaps between pericytes and were preferentially used by migrating neutrophils during their passage through cytokine-stimulated venules. Although neutrophil transmigration did not alter the number/unit area of extracellular matrix protein low expression sites, the size of these regions was enlarged and their protein content was reduced in interleukin-1β–stimulated venules. These effects were entirely dependent on the presence of neutrophils and appeared to involve neutrophil-derived serine proteases. Furthermore, evidence was obtained indicating that transmigrating neutrophils carry laminins on their cell surface in vivo. Collectively, through identification of regions of low extracellular matrix protein localization that define the preferred route for transmigrating neutrophils, we have identified a plausible mechanism by which neutrophils penetrate the vascular BM without causing a gross disruption to its intricate structure.

Pericytes in the microvasculature.

P D'Amore,  K Hirschi,  Patricia D’Amore (1996)
Pericytes, also known as Rouget cells or mural cells, are associated abluminally with all vascular capillaries and post-capillary venules. Differences in pericyte morphology and distribution among vascular beds suggest tissue-specific functions. Based on their location and their complement of muscle cytoskeletal proteins, pericytes have been proposed to play a role in the regulation of blood flow. In vitro studies demonstrating the contractile ability of pericytes support this concept. Pericytes have also been suggested to be oligopotential and have been reported to differentiate into adipocytes, osteoblasts and phagocytes. The mechanisms involved in vessel formation have yet to be elucidated but observations indicate that the primordial endothelium can recruit undifferentiated mesenchymal cells and direct their differentiation into pericytes in microvessels, and smooth muscle cells in large vessels. Communication between endothelial cells and pericytes, or their precursors, may take many forms. Soluble factors such as platelet-derived growth factor and transforming growth factors-beta are likely to be involved. In addition, physical contact mediated by cell adhesion molecules, integrins and gap junctions appear to contribute to the control of vascular growth and function. Development of culture methods has allowed some functions of pericytes to be directly examined. Co-culture of pericytes with endothelial cells leads to the activation of transforming growth factor-beta, which in turn influences the growth and differentiation of the vascular cells. Finally, the pericyte has been implicated in the development of a variety of pathologies including hypertension, multiple sclerosis, diabetic microangiopathy and tumor vascularization.

Leukocyte-endothelial-cell interactions in leukocyte transmigration and the inflammatory response.