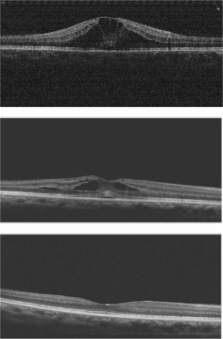 This report describes a patient who had exaggerated responses to different inflammatory stimuli represented by laser and incisional surgery, respectively. These separate episodes should have a common link represented by a genetic predisposition to abnormal release of proinflammatory mediators within the eye. This 51-year old Hispanic woman showed a narrow iridocorneal angle with plateau iris configuration. Nd-YAG laser peripheral iridotomy was successfully performed to both eyes. No substantial changes in the iridotrabecular angle occurred despite patent iridotomies, thus confirming the diagnosis of plateau iris configuration. Argon laser iridoplasty was then performed to the right eye, while the left eye was scheduled for a later session. A severe inflammatory reaction within the anterior chamber developed after tapering of a one-week course of steroid therapy. Phacoemulsification of the lens was performed some months later when no signs of inflammation were detectable; no intraoperative complications occurred during surgery and an intraocular lens was placed. Cystoid macular edema developed four weeks after surgery despite no apparent risk factors, and resolved completely after anti-inflammatory medical therapy. Based on this case report, the unusual occurrence of severe iritis after laser treatment should be regarded as a risk factor for any other incisional or nonincisional procedures because it might indicate that the patient’s ocular tissues are prone to release of abnormally elevated proinflammatory mediators. Although further studies are needed to confirm this predisposition, prophylactic adjunctive topical nonsteroidal anti-inflammatory drug administration after cataract surgery should be considered in such cases in order to prevent potentially sight-threatening conditions.

S.C. Sacca,  C Bolognesi,  A Battistella … (2009)
Degenerative ocular diseases are widespread in the population and represent a major cause of reversible and irreversible blindness. Scientific evidences have been accumulating supporting the role of genotoxic damage and gene environment interactions in the pathogenesis of these diseases mainly including glaucoma, age-related macular degeneration, and cataract. Glaucoma, in its degenerative form, is characterized by the degeneration of the trabecular meshwork, the tissue of the anterior chamber of the eye devoted to aqueous-humour outflow. Such a degenerative process results in intra-ocular pressure increase and progressive damage of optic nerve head. Oxidative stress and DNA damage play an important role in inducing the degeneration of these well differentiated target tissues in which DNA damage results in a progressive cell loss. Macular degeneration is a common age-related disease affecting the central regions of the retina inducing progressive accumulation of oxidized lipoproteins and neovascularization. Environmental genotoxic risk factors include diet, light, and cigarette smoke paralleled by individual susceptibility as determined by adverse genetic assets. Cataract is a progressive opacity of the crystalline lens resulting from molecular damages induced by various risk factors including UV-containing light. This disease has been related to a failure in antioxidant defences. Experimental study provides evidence that cataract patients possess higher basal level of DNA damage, as evaluated by Comet test, in lymphocytes than controls. This finding is paralleled by the higher susceptibility to oxidative stress observed in the same patients. These novel experimental data further support the role of DNA damage as a main factor contributing to cataract onset. In conclusion, the examined degenerative ocular diseases recognise environmental risk factors often displaying genotoxic attitudes. Whenever these factors target individuals who are susceptible due their genetic assets the results is the onset of a specific eye disease depending on the affected ocular tissue.

Medical prophylaxis and treatment of cystoid macular edema after cataract surgery. The results of a meta-analysis.

K Dickersin,  J. Chaudhuri,  Maria Rossetti (1998)
The study aimed to determine the effectiveness of prophylactic medical intervention in reducing the incidence of cystoid macular edema (CME) and the effectiveness of medical treatment for chronic CME after cataract surgery. The study design was a systematic review and meta-analysis of published reports of randomized clinical trials (RCTs). Sixteen RCTs involving 2898 eyes examining the effectiveness of medical prophylaxis of CME and 4 RCTs involving 187 eyes testing the effectiveness of medical treatment of chronic CME were used in the study. Medical prophylaxis of treatment (cyclo-oxygenase inhibitors or corticosteroids) versus control (placebo or active treatment) was performed. Incidence of angiographically diagnosed CME, incidence of clinically significant CME, and vision were measured. Thirty-six articles reported testing a prophylactic medical intervention for CME after cataract surgery. The incidence of CME varied extensively across studies and was related to the study design used. Summary odds ratios (OR) indicated that prophylactic intervention was effective in reducing the incidence of both angiographic CME (OR = 0.36; 95% confidence interval [CI] = 0.28-0.45) and clinically relevant CME (OR = 0.49; 95% CI = 0.33-0.73). There also was a statistically significant positive effect on improving vision (OR = 1.97; 95% CI = 1.14-3.41). A combination of the results of the four RCTs testing medical therapy for chronic CME indicated a treatment benefit in terms of improving final visual acuity by two or more Snellen lines (OR = 2.67; 95% CI = 1.35-5.30). Assessment of the quality of the 20 RCTs included in the meta-analyses indicated problems in the design, execution, and reporting of a number of trials. A combination of the results from RCTs indicates that medical prophylaxis for aphakic and pseudophakic CME and medical treatment for chronic CME are beneficial. Because most of the RCTs performed to date have problems related to quality, a well-designed RCT is needed to confirm this result, using clinical CME and vision as outcomes.