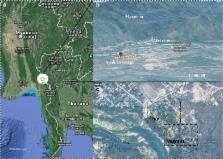 Cross-border malaria transmission is an important problem for national malaria control programmes. The epidemiology of cross-border malaria is further complicated in areas where Plasmodium falciparum and Plasmodium vivax are both endemic. By combining passive case detection data with entomological data, a transmission scenario on the northwestern Thai–Myanmar border where P. falciparum is likely driven by importation was described, whereas P. vivax is also locally transmitted. This study highlights the differences in the level of control required to eliminate P. falciparum and P. vivax from the same region.

Recent migrants were almost four times more likely to be infected with P. falciparum compared with Thai patients (OR 3.84, p < 0.001) and cases were significantly associated with seasonal migration. However, P. falciparum infection was not associated with the Anopheles mosquito capture rates, suggesting predominantly imported infections. In contrast, recent migrants were equally likely to present with P. vivax as mid-term migrants. Both migrant groups were twice as likely to be infected with P. vivax in comparison to the resident Thai population (OR 1.96, p < 0.001 and OR 1.94, p < 0.001, respectively). Plasmodium vivax cases were strongly correlated with age and local capture rates of two major vector species Anopheles minimus and Anopheles maculatus (OR 1.23, p = 0.020 and OR 1.33, p = 0.046, respectively), suggesting that a high level of local transmission might be causing these infections.

On the Thai–Myanmar border, P. falciparum infections occur mostly in the recent migrant population with a seasonality reflecting that of agricultural activity, rather than that of the local mosquito population. This suggests that P. falciparum was mostly imported. In contrast, P. vivax cases were significantly associated with mosquito capture rates and less with migrant status, indicating local transmission. This highlights the different timelines and requirements for P. falciparum and P. vivax elimination in the same region and underlines the importance of multinational, cross-border malaria control.

Malaria in the Greater Mekong Subregion: heterogeneity and complexity.

Liwang Cui,  Guiyun Yan,  Jetsumon Sattabongkot … (2012)
The Greater Mekong Subregion (GMS), comprised of six countries including Cambodia, China's Yunnan Province, Lao PDR, Myanmar (Burma), Thailand and Vietnam, is one of the most threatening foci of malaria. Since the initiation of the WHO's Mekong Malaria Program a decade ago, malaria situation in the GMS has greatly improved, reflected in the continuous decline in annual malaria incidence and deaths. However, as many nations are moving towards malaria elimination, the GMS nations still face great challenges. Malaria epidemiology in this region exhibits enormous geographical heterogeneity with Myanmar and Cambodia remaining high-burden countries. Within each country, malaria distribution is also patchy, exemplified by 'border malaria' and 'forest malaria' with high transmission occurring along international borders and in forests or forest fringes, respectively. 'Border malaria' is extremely difficult to monitor, and frequent malaria introductions by migratory human populations constitute a major threat to neighboring, malaria-eliminating countries. Therefore, coordination between neighboring countries is essential for malaria elimination from the entire region. In addition to these operational difficulties, malaria control in the GMS also encounters several technological challenges. Contemporary malaria control measures rely heavily on effective chemotherapy and insecticide control of vector mosquitoes. However, the spread of multidrug resistance and potential emergence of artemisinin resistance in Plasmodium falciparum make resistance management a high priority in the GMS. This situation is further worsened by the circulation of counterfeit and substandard artemisinin-related drugs. In most endemic areas of the GMS, P. falciparum and Plasmodium vivax coexist, and in recent malaria control history, P. vivax has demonstrated remarkable resilience to control measures. Deployment of the only registered drug (primaquine) for the radical cure of vivax malaria is severely undermined due to high prevalence of glucose-6-phosphate dehydrogenase deficiency in target human populations. In the GMS, the dramatically different ecologies, diverse vector systems, and insecticide resistance render traditional mosquito control less efficient. Here we attempt to review the changing malaria epidemiology in the GMS, analyze the vector systems and patterns of malaria transmission, and identify the major challenges the malaria control community faces on its way to malaria elimination. Copyright Â© 2011 Elsevier B.V. All rights reserved.

Malaria Burden and Artemisinin Resistance in the Mobile and Migrant Population on the Thai–Myanmar Border, 1999–2011: An Observational Study

Lessons from the past: managing insecticide resistance in malaria control and eradication programmes.

Janet Hemingway,  Hilary Ranson,  Louise Kelly-Hope (2008)
The distribution of insecticide-treated bednets to help combat the burden of malaria in sub-Saharan Africa has accelerated in the past 5 years. Additionally, many countries are also considering, or have already begun, indoor residual spraying campaigns. These are positive developments, since vector control has repeatedly proven to be an effective means of reducing malaria transmission. However, the sustainability of these insecticide-based interventions relies on the continuing susceptibility of the anopheles vectors to the limited number of available insecticides. Continual monitoring for early signs of insecticide resistance and the adoption of carefully considered resistance management strategies are therefore required. Regrettably, this essential monitoring component is frequently given a low priority in the push to meet ambitious coverage targets. We outline the key requirements for establishing an insecticide resistance surveillance system and urge all those involved in malaria vector control, either directly or as facilitators, to ensure that these measures are incorporated into control programmes. Failure to act now will inevitably lead to a future breakdown in disease control and jeopardise hopes of eradicating this major public-health problem.