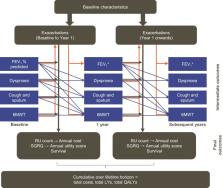 Compared with FF/VI and UMEC/VI over a lifetime horizon, the analyses predicted that treatment with FF/UMEC/VI resulted in fewer moderate and severe exacerbations, more LYs and more QALYs gained, with a small incremental cost. The base-case incremental cost-effectiveness ratio (ICER) per QALY gained was C$18,989 (95% confidence interval [CI]: C$14,665, C$25,753) versus FF/VI and C$13,776 (95% CI: C$9787, C$19,448) versus UMEC/VI. FF/UMEC/VI remained cost-effective versus both FF/VI and UMEC/VI in all sensitivity analyses, including in scenario analyses that considered different intervention and comparator discontinuation rates, and treatment effects for subsequent therapy.

Treatment with FF/UMEC/VI was predicted to improve outcomes and be a cost-effective treatment option for patients with symptomatic COPD and a history of exacerbations compared with FF/VI or UMEC/VI, in Canada.

Does quality of life of COPD patients as measured by the generic EuroQol five-dimension questionnaire differentiate between COPD severity stages?

Comparisons of health status scores with MRC grades in COPD: implications for the GOLD 2011 classification.

S Ehteshami-Afshar,  J FitzGerald,  M M Doyle-Waters … (2016)
Non-communicable diseases are now the number one cause of disabilities and loss of life expectancy. Among them, chronic respiratory conditions constitute a major class. The burden of chronic respiratory diseases is generally increasing across the globe, and asthma and chronic obstructive pulmonary disease (COPD) are among the main causes of mortality and morbidity. However, the direct and indirect costs of these conditions vary across jurisdictions. This article reports on recent estimates of the costs of asthma and COPD, with a focus on comparing disease burden across different regions. Overall, there is tremendous variation in per capita annual costs of asthma and COPD. However, the methodology of the cost-of-illness studies is also vastly different, making it difficult to associate differences in reported costs to differences in the true burden of asthma and COPD. Suggestions are provided towards improving the validity and comparability of future studies.