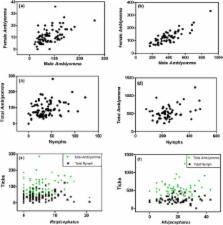 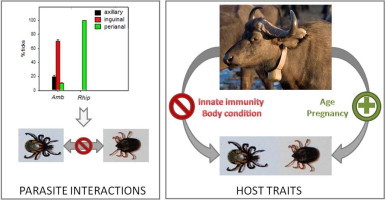 Ticks are of vast importance to livestock health, and contribute to conflicts between wildlife conservation and agricultural interests; but factors driving tick infestation patterns on wild hosts are not well understood. We studied tick infestation patterns on free-ranging African buffalo ( Syncercus caffer), asking (i) is there evidence for niche segregation among tick species?; and (ii) how do host characteristics affect variation in tick abundance among hosts? We identified ticks and estimated tick burdens on 134 adult female buffalo from two herds at Kruger National Park, South Africa. To assess niche segregation, we evaluated attachment site preferences and tested for correlations between abundances of different tick species. To investigate which host factors may drive variability in tick abundance, we measured age, body condition, reproductive and immune status in all hosts, and examined their effects on tick burdens.

This study is one of the first to link ectoparasite abundance patterns and immunity in a free-ranging mammalian host population. Based on independent abundances of A. hebraeum and R. e. evertsi on individual buffalo, we would expect no association between the diseases these ticks transmit. Longitudinal studies linking environmental variability with host immunity are needed to understand tick infestation patterns and the dynamics of tick-borne diseases in wildlife.

K. G. Murphy,  Elena A. Sher,  Shaymaa Abbas (1996)
The existence of subsets of CD4+ helper T lymphocytes that differ in their cytokine secretion patterns and effector functions provides a framework for understanding the heterogeneity of normal and pathological immune responses. Defining the cellular and molecular mechanisms of helper-T-cell differentiation should lead to rational strategies for manipulating immune responses for prophylaxis and therapy.

Two types of murine helper T cell clone. I. Definition according to profiles of lymphokine activities and secreted proteins.

M Giedlin,  Tim R. Mosmann,  H Cherwinski … (1986)
A panel of antigen-specific mouse helper T cell clones was characterized according to patterns of lymphokine activity production, and two types of T cell were distinguished. Type 1 T helper cells (TH1) produced IL 2, interferon-gamma, GM-CSF, and IL 3 in response to antigen + presenting cells or to Con A, whereas type 2 helper T cells (TH2) produced IL 3, BSF1, and two other activities unique to the TH2 subset, a mast cell growth factor distinct from IL 3 and a T cell growth factor distinct from IL 2. Clones representing each type of T cell were characterized, and the pattern of lymphokine activities was consistent within each set. The secreted proteins induced by Con A were analyzed by biosynthetic labeling and SDS gel electrophoresis, and significant differences were seen between the two groups of T cell line. Both types of T cell grew in response to alternating cycles of antigen stimulation, followed by growth in IL 2-containing medium. Examples of both types of T cell were also specific for or restricted by the I region of the MHC, and the surface marker phenotype of the majority of both types was Ly-1+, Lyt-2-, L3T4+, Both types of helper T cell could provide help for B cells, but the nature of the help differed. TH1 cells were found among examples of T cell clones specific for chicken RBC and mouse alloantigens. TH2 cells were found among clones specific for mouse alloantigens, fowl gamma-globulin, and KLH. The relationship between these two types of T cells and previously described subsets of T helper cells is discussed.

Nicholas Turner,  Anna Jolles,  Han Olff … (2008)
Epidemiological studies typically focus on single-parasite systems, although most hosts harbor multiple parasite species; thus, the potential impacts of co-infection on disease dynamics are only beginning to be recognized. Interactions between macroparasites, such as gastrointestinal nematodes, and microparasites causing diseases like TB, AIDS, and malaria are particularly interesting because co-infection may favor transmission and progression of these important diseases. Here we present evidence for strong interactions between gastrointestinal worms and bovine tuberculosis (TB) in free-ranging African buffalo (Syncerus caffer). TB and worms are negatively associated at the population, among-herd, and within-herd scales, and this association is not solely the result of demographic heterogeneities in infection. Combining data from 1362 buffalo with simple mechanistic models, we find that both accelerated mortality of co-infected individuals and TB transmission heterogeneity caused by trade-offs in immunity to the two types of parasites likely contribute to observed infection patterns. This study is one of the first to examine the relevance of within-host immunological trade-offs for understanding parasite distribution patterns in natural populations.

This is an open-access article distributed under the terms of the Creative Commons Attribution-NonCommercial-ShareAlike License, which permits non-commercial use, distribution, and reproduction in any medium, provided the original author and source are credited.