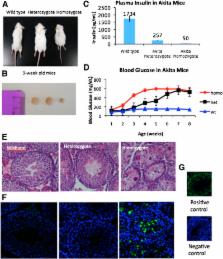 The mechanism responsible for poor reproductive outcomes in type 1 diabetic males is not well understood. In light of new evidence that the Sertoli cells of the testis secrete insulin, it is currently unclear whether diabetic subfertility is the result of deficiency of pancreatic insulin, testicular insulin, or both. In this study, the Akita mouse diabetic model, which expresses a mutant, nonfunctional form of ins2 in testes and pancreas, was used to distinguish between systemic and local effects of insulin deficiency on the process of spermatogenesis and fertility. We determined that Akita homozygous male mice are infertile and have reduced testis size and abnormal morphology. Spermatogonial germ cells are still present but are unable to mature into spermatocytes and spermatids. Exogenous insulin treatment regenerates testes and restores fertility, but this plasma insulin cannot pass through the blood-testis barrier. We conclude that insulin does not rescue fertility through direct interaction with the testis; instead, it restores function of the hypothalamic-pituitary-gonadal axis and, thus, normalizes hormone levels of luteinizing hormone and testosterone. Although we show that the Sertoli cells of the testis secrete insulin protein, this insulin does not appear to be critical for fertility.

Eiichi Araki,  Shizuo Akira,  Kiyoshi Takeda … (2002)
Overload of pancreatic beta cells in conditions such as hyperglycemia, obesity, and long-term treatment with sulfonylureas leads to beta cell exhaustion and type 2 diabetes. Because beta cell mass declines under these conditions, apparently as a result of apoptosis, we speculated that overload kills beta cells as a result of endoplasmic reticulum (ER) stress. The Akita mouse, which carries a conformation-altering missense mutation (Cys96Tyr) in Insulin 2, likewise exhibits hyperglycemia and a reduced beta cell mass. In the development of diabetes in Akita mice, mRNAs for the ER chaperone Bip and the ER stress-associated apoptosis factor Chop were induced in the pancreas. Overexpression of the mutant insulin in mouse MIN6 beta cells induced Chop expression and led to apoptosis. Targeted disruption of the Chop gene delayed the onset of diabetes in heterozygous Akita mice by 8-10 weeks. We conclude that ER overload in beta cells causes ER stress and leads to apoptosis via Chop induction. Our findings suggest a new therapeutic approach for preventing the onset of diabetes by inhibiting Chop induction or by increasing chaperone capacity in the ER.

Diabetes and the impairment of reproductive function: possible role of mitochondria and reactive oxygen species.

João Ramalho-Santos,  Sandra Amaral Rocco,  Paulo J. Oliveira (2008)
Diabetes Mellitus (DM), a state of chronic hyperglycemia, is a major cause of serious micro and macrovascular diseases, affecting, therefore, nearly every system in the body. Growing evidence indicates that oxidative stress is increased in diabetes due to overproduction of reactive oxygen species (ROS) and decreased efficiency of antioxidant defences, a process that starts very early and worsens over the course of the disease. During the development of diabetes, oxidation of lipids, proteins and DNA increase with time. Mitochondrial DNA mutations have also been reported in diabetic tissues, suggesting oxidative stress-related mitochondrial damage. Diabetes-related oxidative stress may also be the trigger for many alterations on sexual function, which can also include decreased testicular mitochondrial function. Although sexual disorders have been extensively studied in diabetic men, possible changes in the sexual function of diabetic women have only recently received attention. The prevalence of sexual dysfunction in diabetic men approaches 50%, whereas in diabetic women it seems to be slightly lower. Testicular dysfunction, impotence, decreased fertility potential and retrograde ejaculations are conditions that have been described in diabetic males. Diabetes is also the most common cause of erectile dysfunction in men. Poor semen quality has also been reported in diabetic men, including decreased sperm motility and concentration, abnormal morphology and increased seminal plasma abnormalities. In addition, diabetic men may have decreased serum testosterone due to impaired Leydig cell function. Among diabetic women neuropathy, vascular impairment and psychological complaints have been implicated in the pathogenesis of decreased libido, low arousability, decreased vaginal lubrication, orgasmic dysfunction, and dyspareunia. An association between the production of excess radical oxygen species and disturbed embryogenesis in diabetic pregnancies has also been suggested. In fact, maternal diabetes during pregnancy is associated with an increased risk of complications in the offspring, such as altered fetal growth, polyhydramnios, fetal loss and congenital malformations. In addition, hypocalemia and reduced bone mineral content are found in neonates of diabetic mothers. Abnormalities in gametogenesis and sexual function have also been documented in animal models for both types of Diabetes, which thus constitute an important research tool to both study the effects of the disease, and to test novel therapeutical interventions. Because sexuality and fertility are important aspects in the lives of individuals and couples, and considering that over 124 million individuals worldwide suffer from Diabetes, this review highlights the impact of Diabetes and associated oxidative stress on sexual function.