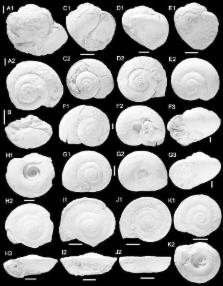 On the origin of Acochlidia and other enigmatic euthyneuran gastropods, with implications for the systematics of Heterobranchia

Katharina M Jörger,  Isabella Stöger,  Yasunori Kano … (2010)
Background A robust phylogenetic hypothesis of euthyneuran gastropods, as a basis to reconstructing their evolutionary history, is still hindered by several groups of aberrant, more or less worm-like slugs with unclear phylogenetic relationships. As a traditional "order" in the Opisthobranchia, the Acochlidia have a long history of controversial placements, among others influenced by convergent adaptation to the mainly meiofaunal habitats. The present study includes six out of seven acochlidian families in a comprehensive euthyneuran taxon sampling with special focus on minute, aberrant slugs. Since there is no fossil record of tiny, shell-less gastropods, a molecular clock was used to estimate divergence times within Euthyneura. Results Our multi-locus molecular study confirms Acochlidia in a pulmonate relationship, as sister to Eupulmonata. Previous hypotheses of opisthobranch relations, or of a common origin with other meiofaunal Euthyneura, are clearly rejected. The enigmatic amphibious and insectivorous Aitengidae incerta sedis clusters within Acochlidia, as sister to meiofaunal and brackish Pseudunelidae and limnic Acochlidiidae. Euthyneura, Opisthobranchia and Pulmonata as traditionally defined are non-monophyletic. A relaxed molecular clock approach indicates a late Palaeozoic diversification of Euthyneura and a Mesozoic origin of the major euthyneuran diversity, including Acochlidia. Conclusions The present study shows that the inclusion of small, enigmatic groups is necessary to solve deep-level phylogenetic relationships, and underlines that "pulmonate" and "opisthobranch" phylogeny, respectively, cannot be solved independently from each other. Our phylogenetic hypothesis requires reinvestigation of the traditional classification of Euthyneura: morphological synapomorphies of the traditionally defined Pulmonata and Opisthobranchia are evaluated in light of the presented phylogeny, and a redefinition of major groups is proposed. It is demonstrated that the invasion of the meiofaunal habitat has occurred several times independently in various euthyneuran taxa, leading to convergent adaptations previously misinterpreted as synapomorphies. The inclusion of Acochlidia extends the structural and biological diversity in pulmonates, presenting a remarkable flexibility concerning habitat choice.

Freshwater Snails Of Africa And Their Medical Importance

The non‐marine aquatic Mollusca of Thailand