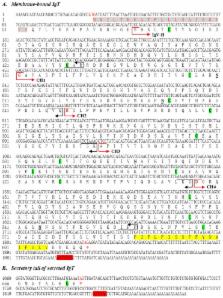 Immunoglobulin tau (IgT) is a new teleost immunoglobulin isotype, and its potential function in adaptive immunity is not very clear. In the present study, the membrane-bound and secreted IgT (mIgT and sIgT) heavy chain genes were cloned for the first time and characterized in flounder ( Paralichthys olivaceus), and found the nucleic acid sequence were exactly same in the Cτ1–Cτ4 constant domains of mIgT and sIgT, but different in variable regions and the C-terminus. The amino acid sequence of mIgT shared higher similarity with Bovichtus diacanthus (51.2%) and Dicentrarchus labrax (45.0%). Amino acid of flounder IgT, IgM, and IgD heavy chain was compared and the highest similarity was found between IgT Cτ1 and IgM Cμ1 (38%). In healthy flounder, the transcript levels of IgT mRNA were the highest in gill, spleen, and liver, and higher in peripheral blood leucocytes, skin, and hindgut. After infection and vaccination with Edwardsiella tarda via intraperitoneal injection and immersion, the qRT-PCR analysis demonstrated that the IgT mRNA level was significantly upregulated in all tested tissues, with similar dynamic tendency that increased firstly and then decreased, and higher in gill, skin, hindgut, liver, and stomach in immersion than in the injection group, but no significant difference existed in spleen and head kidney between immersion and injection groups. These results revealed that IgT responses could be simultaneously induced in both mucosal and systemic tissues after infection/vaccination via injection and immersion route, but IgT might play a more important role in mucosal immunity than in systemic immunity.

Regulation of mRNA translation by 5'- and 3'-UTR-binding factors.

S Wilkie,  Emmanuel K Dickson,  Andrew Gray (2003)
The translational regulation of specific mRNAs is important for controlling gene expression. The past few years have seen a rapid expansion in the identification and characterization of mRNA regulatory elements and their binding proteins. For the majority of these examples, the mechanism by which translational regulation is achieved is not well understood. Nevertheless, detailed analyses of a few examples show that almost every event in the initiation pathway, from binding of the cap complex to the joining of the 60S ribosomal subunit, is subject to regulation.

Translational control by the 3'-UTR: the ends specify the means.

Jessica L. Fox,  B. Mazumder,  Vasudevan Seshadri (2003)
In most cases, translational control mechanisms result from the interaction of RNA-binding proteins with 5'- or 3'-untranslated regions (UTRs) of mRNA. In organisms ranging from viruses to humans, protein-mediated interactions between transcript termini result in the formation of an RNA loop. Such RNA 'circularization' is thought to increase translational efficiency and, in addition, permits regulation by novel mechanisms, particularly 3'-UTR-mediated translational control. Two general mechanisms of translational inhibition by 3'-UTR-binding proteins have been proposed, one in which mRNA closure is disrupted and another in which mRNA closure is required. Experimental evidence for the latter is provided by studies of interferon-gamma-mediated translational silencing of ceruloplasmin expression in monocytic cells. A multi-species analysis has shown that, in most vertebrates, 3'-UTRs are substantially longer than their 5' counterparts, indicating a significant potential for regulation. In addition, the average length of 3'-UTR sequences has increased during evolution, suggesting that their utilization might contribute to organism complexity.

The PROSITE database, its status in 2002.

Philipp Bucher,  Marco Pagni,  Nicolas Hulo … (2002)
PROSITE [Bairoch and Bucher (1994) Nucleic Acids Res., 22, 3583-3589; Hofmann et al. (1999) Nucleic Acids Res., 27, 215-219] is a method of identifying the functions of uncharacterized proteins translated from genomic or cDNA sequences. The PROSITE database (http://www.expasy.org/prosite/) consists of biologically significant patterns and profiles designed in such a way that with appropriate computational tools it can rapidly and reliably help to determine to which known family of proteins (if any) a new sequence belongs, or which known domain(s) it contains.