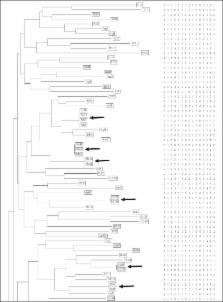 This study was carried out in order to investigating the effect of travelling on the transmission of tuberculosis from high- to low-burden TB countries. Mycobacteria samples isolated from patients of distinct and relatively co-related countries (Azerbaijan Republic and Tabriz [located in the northwest of Iran]) were analyzed through 15 loci MIRU-VNTR typing method. PCR was done using special primers for each of the loci; then the number of allele repeats for all loci were determined by the size of their fragments. Finally, the created numeric patterns for each isolate were analyzed and clustered, using MIRU-VNTRplus.org website. All 119 isolates dispersing at 106 distinct patterns were composed of 10 clusters with 23 members and 96 unique patterns. Nine and five loci had high and moderate discriminatory power, respectively, but only one of them was poor in clustering. The study showed that 89.08% of TB cases involved resulted from the reactivation pattern and 10.92% were related to ongoing transmission. Although Azerbaijan Republic is a higher-burden TB region than Tabriz and Azerbaijan people make frequent tours to Tabriz to receive low or free medical services, the findings showed no TB transmission from the regions at least during the year of the study.

Extraction of Mycobacterium tuberculosis DNA: a question of containment.

Louise Thibert,  W Somerville,  Marcel A Behr … (2005)
DNA fingerprinting of Mycobacterium tuberculosis by IS6110 restriction fragment length polymorphism analysis requires substantial high-quality DNA. We demonstrated that, despite extraction treatments that might be expected to inactivate this organism, M. tuberculosis remained viable during this process. These data suggest that the extraction of M. tuberculosis DNA should be performed within containment until complete.

Risk of Mycobacterium tuberculosis transmission in a low-incidence country due to immigration from high-incidence areas.

T Lillebaek,  Peter Jensen,  Ashley Bauer … (2001)
Does immigration from a high-prevalence area contribute to an increased risk of tuberculosis in a low-incidence country? The tuberculosis incidence in Somalia is among the highest ever registered. Due to civil war and starvation, nearly half of all Somalis have been forced from their homes, causing significant migration to low-incidence countries. In Denmark, two-thirds of all tuberculosis patients are immigrants, half from Somalia. To determine the magnitude of Mycobacterium tuberculosis transmission between Somalis and Danes, we analyzed DNA fingerprint patterns of isolates collected in Denmark from 1992 to 1999, comprising >97% of all culture-positive patients (n = 3,320). Of these, 763 were Somalian immigrants, 55.2% of whom shared identical DNA fingerprint patterns; 74.9% of these were most likely infected before their arrival in Denmark, 23.3% were most likely infected in Denmark by other Somalis, and 1.8% were most likely infected by Danes. In the same period, only 0.9% of all Danish tuberculosis patients were most likely infected by Somalis. The Somalian immigrants in Denmark could be distributed into 35 different clusters with possible active transmission, of which 18 were retrieved among Somalis in the Netherlands. This indicated the existence of some internationally predominant Somalian strains causing clustering less likely to represent recent transmission. In conclusion, M. tuberculosis transmission among Somalis in Denmark is limited, and transmission between Somalis and Danes is nearly nonexistent. The higher transmission rates between nationalities found in the Netherlands do not apply to the situation in Denmark and not necessarily elsewhere, since many different factors may influence the magnitude of active transmission.