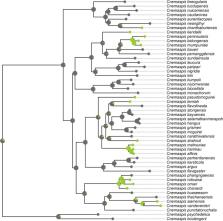 It is often assumed that animals’ temporal activity patterns are highly conserved throughout evolution. While most geckos are nocturnal, the species in the Cnemaspis genus are mostly diurnal (only a few are nocturnal). This raises a question about the evolution of a diel niche in the Cnemaspis genus. Cnemaspis geckos are distributed across Southeast Asia and are often sympatric with Cyrtodactylus, another widespread gecko genus in the same area. Since both genera are mainly rocky habitat specialists, we hypothesize that Cyrtodactylus may influence the temporal activity pattern of Cnemaspis when they are sympatric through competition. By analyzing habitat data, diel activity, and the existence of sympatric Cyrtodactylus species across the phylogeny of the Cnemaspis genus, we found (1) strong phylogenetic signals in the habitat use trait but not in temporal activity, suggesting that the diel niche of this genus is more labile compared with habitat niche, and (2) a significant association with the temporal activity pattern of Cnemaspis and the sympatry between the two genera, with the former tending to be diurnal when they are sympatric. Originated from a diurnal common ancestor, the release from competition with Cyrtodactylus species might open an opportunity for some Cnemaspis species to shift to nocturnal niches.

History and the global ecology of squamate reptiles.

Laurie J. Vitt,  Eric Pianka,  William Cooper … (2003)
The structure of communities may be largely a result of evolutionary changes that occurred many millions of years ago. We explore the historical ecology of squamates (lizards and snakes), identify historically derived differences among clades, and examine how this history has affected present-day squamate assemblages globally. A dietary shift occurred in the evolutionary history of squamates. Iguanian diets contain large proportions of ants, other hymenopterans, and beetles, whereas these are minor prey in scleroglossan lizards. A preponderance of termites, grasshoppers, spiders, and insect larvae in their diets suggests that scleroglossan lizards harvest higher energy prey or avoid prey containing noxious chemicals. The success of this dietary shift is suggested by dominance of scleroglossans in lizard assemblages throughout the world. One scleroglossan clade, Autarchoglossa, combined an advanced vomeronasal chemosensory system with jaw prehension and increased activity levels. We suggest these traits provided them a competitive advantage during the day in terrestrial habitats. Iguanians and gekkotans shifted to elevated microhabitats historically, and gekkotans shifted activity to nighttime. These historically derived niche differences are apparent in extant lizard assemblages and account for some observed structure. These patterns occur in a variety of habitats at both regional and local levels throughout the world.

Robert Ricklefs (2012)
The relationship between species richness and the occupation of niche space can provide insight into the processes that shape patterns of biodiversity. For example, if species interactions constrained coexistence, one might expect tendencies toward even spacing within niche space and positive relationships between diversity and total niche volume. I use morphological diversity of passerine birds as a proxy for diet, foraging maneuvers, and foraging substrates and examine the morphological space occupied by regional and local passerine avifaunas. Although independently diversified regional faunas exhibit convergent morphology, species are clustered rather than evenly distributed, the volume of the morphological space is weakly related to number of species per taxonomic family, and morphological volume is unrelated to number of species within both regional avifaunas and local assemblages. These results seemingly contradict patterns expected when species interactions constrain regional or local diversity, and they suggest a larger role for diversification, extinction, and dispersal limitation in shaping species richness.