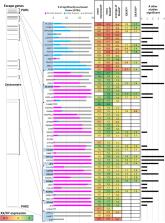 One of the two X chromosomes in females is epigenetically inactivated, thereby compensating for the dosage difference in X‐linked genes between XX females and XY males. Not all X‐linked genes are completely inactivated, however, with 12% of genes escaping X chromosome inactivation and another 15% of genes varying in their X chromosome inactivation status across individuals, tissues or cells. Expression of these genes from the second and otherwise inactive X chromosome may underlie sex differences between males and females, and feature in many of the symptoms of XXY Klinefelter males, who have both an inactive X and a Y chromosome. We review the approaches used to identify genes that escape from X‐chromosome inactivation and discuss the nature of their sex‐biased expression. These genes are enriched on the short arm of the X chromosome, and, in addition to genes in the pseudoautosomal regions, include genes with and without Y‐chromosomal counterparts. We highlight candidate escape genes for some of the features of Klinefelter syndrome and discuss our current understanding of the mechanisms underlying silencing and escape on the X chromosome as well as additional differences between the X in males and females that may contribute to Klinefelter syndrome.

Gene action in the X-chromosome of the mouse (Mus musculus L.).

Kristian Gray,  Hilde Van Esch,  Jozef Gecz … (2009)
Large-scale systematic resequencing has been proposed as the key future strategy for the discovery of rare, disease-causing sequence variants across the spectrum of human complex disease. We have sequenced the coding exons of the X chromosome in 208 families with X-linked mental retardation (XLMR), the largest direct screen for constitutional disease-causing mutations thus far reported. The screen has discovered nine genes implicated in XLMR, including SYP, ZNF711 and CASK reported here, confirming the power of this strategy. The study has, however, also highlighted issues confronting whole-genome sequencing screens, including the observation that loss of function of 1% or more of X-chromosome genes is compatible with apparently normal existence.