Febrile Neutropenia in Children with Cancer 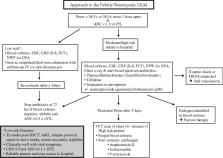 Journal: Hot Topics in Infection and Immunity in Children V

2002 guidelines for the use of antimicrobial agents in neutropenic patients with cancer.

J Herrstedt,  David D. K. Rolston,  R Feld … (2000)
Febrile neutropenia remains a potentially life-threatening complication of anticancer chemotherapy, but some patients are at low risk for serious medical complications. The purpose of this study was to develop an internationally validated scoring system to identify these patients. Febrile neutropenic cancer patients were observed in a prospective multinational study. Independent factors assessable at fever onset, predicting low risk of complications, on a randomly selected derivation set, were assigned integer weights to develop a risk-index score, which was subsequently tested on a validation set. On the derivation set (756 patients), predictive factors were a burden of illness indicating absence of symptoms or mild symptoms (weight, 5; odds ratio [OR], 8.21; 95% confidence interval [CI], 4.15 to 16.38) or moderate symptoms (weight, 3; OR, 3.70; 95% CI, 2.18 to 6.29); absence of hypotension (weight, 5; OR, 7.62; 95% CI, 2.91 to 19.89); absence of chronic obstructive pulmonary disease (weight, 4; OR, 5. 35; 95% CI, 1.86 to 15.46); presence of solid tumor or absence of previous fungal infection in patients with hematologic malignancies (weight, 4; OR, 5.07; 95% CI, 1.97 to 12.95); outpatient status (weight, 3; OR, 3.51; 95% CI, 2.02 to 6.04); absence of dehydration (weight, 3; OR, 3.81; 95% CI, 1.89 to 7.73); and age less than 60 years (weight, 2; OR, 2.45; 95% CI, 1.51 to 4.01). On the validation set, a Multinational Association for Supportive Care in Cancer risk-index score >/= 21 identified low-risk patients with a positive predictive value of 91%, specificity of 68%, and sensitivity of 71%. The risk index accurately identifies patients at low risk for complications and may be used to select patients for testing therapeutic strategies that may be more convenient or cost-effective.

Nasal swab versus nasopharyngeal aspirate for isolation of respiratory viruses.