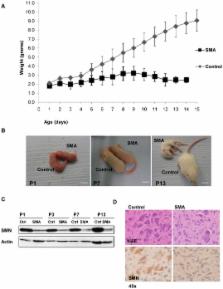 Spinal muscular atrophy is a severe motor neuron disease caused by inactivating mutations in the SMN1 gene leading to reduced levels of full-length functional SMN protein. SMN is a critical mediator of spliceosomal protein assembly, and complete loss or drastic reduction in protein leads to loss of cell viability. However, the reason for selective motor neuron degeneration when SMN is reduced to levels which are tolerated by all other cell types is not currently understood. Widespread splicing abnormalities have recently been reported at end-stage in a mouse model of SMA, leading to the proposition that disruption of efficient splicing is the primary mechanism of motor neuron death. However, it remains unclear whether splicing abnormalities are present during early stages of the disease, which would be a requirement for a direct role in disease pathogenesis. We performed exon-array analysis of RNA from SMN deficient mouse spinal cord at 3 time points, pre-symptomatic (P1), early symptomatic (P7), and late-symptomatic (P13). Compared to littermate control mice, SMA mice showed a time-dependent increase in the number of exons showing differential expression, with minimal differences between genotypes at P1 and P7, but substantial variation in late-symptomatic (P13) mice. Gene ontology analysis revealed differences in pathways associated with neuronal development as well as cellular injury. Validation of selected targets by RT–PCR confirmed the array findings and was in keeping with a shift between physiologically occurring mRNA isoforms. We conclude that the majority of splicing changes occur late in SMA and may represent a secondary effect of cell injury, though we cannot rule out significant early changes in a small number of transcripts crucial to motor neuron survival.

The identification of mutations in the Survival Motor Neuron (SMN) gene as the cause of the severe motor neuron disorder spinal muscular atrophy is one of a number of discoveries implicating selective motor neuron vulnerability to defects in processing of RNA and its associated ribonucleoprotein complexes. An unresolved issue is whether loss of the general cellular function of SMN in spliceosomal assembly, which is predicted to result in widespread defects in mRNA splicing, is directly responsible for motor neuron death. We have used exon-specific microarrays to assess the degree of altered splicing in the spinal cord in a mouse model of SMA. Our finding that the vast majority of splicing changes are a late feature of the disease and may represent a shift to alternative isoform expression, rather than loss of splicing fidelity, provides evidence that widespread splicing disturbance is not a primary feature of the disease pathogenesis but a secondary effect of cell injury in a late phase of the disease. However, our study cannot rule out a role for subtle early changes in one or a few transcripts crucial to motor neuron survival expressed at low levels or in only in a sub-population of spinal cord cells.

SMN deficiency causes tissue-specific perturbations in the repertoire of snRNAs and widespread defects in splicing.

Zhenxi Zhang,  Francesco Lotti,  Kimberly Dittmar … (2008)
The survival of motor neurons (SMN) protein is essential for the biogenesis of small nuclear RNA (snRNA)-ribonucleoproteins (snRNPs), the major components of the pre-mRNA splicing machinery. Though it is ubiquitously expressed, SMN deficiency causes the motor neuron degenerative disease spinal muscular atrophy (SMA). We show here that SMN deficiency, similar to that which occurs in severe SMA, has unexpected cell type-specific effects on the repertoire of snRNAs and mRNAs. It alters the stoichiometry of snRNAs and causes widespread pre-mRNA splicing defects in numerous transcripts of diverse genes, preferentially those containing a large number of introns, in SMN-deficient mouse tissues. These findings reveal a key role for the SMN complex in RNA metabolism and in splicing regulation and indicate that SMA is a general splicing disease that is not restricted to motor neurons.

Sandra Kröber,  Christine Beattie,  Michelle McWhorter … (2008)
Homozygous deletion of the survival motor neuron 1 gene (SMN1) causes spinal muscular atrophy (SMA), the most frequent genetic cause of early childhood lethality. In rare instances, however, individuals are asymptomatic despite carrying the same SMN1 mutations as their affected siblings, thereby suggesting the influence of modifier genes. We discovered that unaffected SMN1-deleted females exhibit significantly higher expression of plastin 3 (PLS3) than their SMA-affected counterparts. We demonstrated that PLS3 is important for axonogenesis through increasing the F-actin level. Overexpression of PLS3 rescued the axon length and outgrowth defects associated with SMN down-regulation in motor neurons of SMA mouse embryos and in zebrafish. Our study suggests that defects in axonogenesis are the major cause of SMA, thereby opening new therapeutic options for SMA and similar neuromuscular diseases.

Francesca Gabanella,  Matthew E. R. Butchbach,  Luciano Saieva … (2007)
Spinal muscular atrophy (SMA) is a motor neuron disease caused by reduced levels of the survival motor neuron (SMN) protein. SMN together with Gemins2-8 and unrip proteins form a macromolecular complex that functions in the assembly of small nuclear ribonucleoproteins (snRNPs) of both the major and the minor splicing pathways. It is not known whether the levels of spliceosomal snRNPs are decreased in SMA. Here we analyzed the consequence of SMN deficiency on snRNP metabolism in the spinal cord of mouse models of SMA with differing phenotypic severities. We demonstrate that the expression of a subset of Gemin proteins and snRNP assembly activity are dramatically reduced in the spinal cord of severe SMA mice. Comparative analysis of different tissues highlights a similar decrease in SMN levels and a strong impairment of snRNP assembly in tissues of severe SMA mice, although the defect appears smaller in kidney than in neural tissue. We further show that the extent of reduction in both Gemin proteins expression and snRNP assembly activity in the spinal cord of SMA mice correlates with disease severity. Remarkably, defective SMN complex function in snRNP assembly causes a significant decrease in the levels of a subset of snRNPs and preferentially affects the accumulation of U11 snRNP—a component of the minor spliceosome—in tissues of severe SMA mice. Thus, impairment of a ubiquitous function of SMN changes the snRNP profile of SMA tissues by unevenly altering the normal proportion of endogenous snRNPs. These findings are consistent with the hypothesis that SMN deficiency affects the splicing machinery and in particular the minor splicing pathway of a rare class of introns in SMA.

Publisher ID: 09-PLGE-RA-1350R2
DOI: 10.1371/journal.pgen.1000773
PMC ID: 2787017
PubMed ID: 20019802
Copyright statement: Baumer et al. This is an open-access article distributed under the terms of the Creative Commons Attribution License, which permits unrestricted use, distribution, and reproduction in any medium, provided the original author and source are credited.