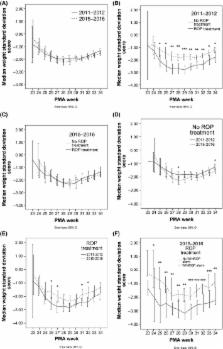 This study evaluated poor weight gain as a risk factor for infants who required treatment for retinopathy of prematurity ( ROP), by comparing those born before and after the implementation of higher oxygen saturation (SpO 2) targets at the Queen Silvia Children's Hospital, Gothenburg, Sweden.

After the SpO 2 target range was increased from 88–92% to 91–95%, postnatal weight gain was no longer a significant risk factor and WINROP lost its ability to predict ROP requiring treatment. Risk factors clearly change as neonatal care develops.

Early Treatment For Retinopathy Of Prematurity Cooperative Group (2003)
To determine whether earlier treatment using ablation of the avascular retina in high-risk prethreshold retinopathy of prematurity (ROP) results in improved grating visual acuity and retinal structural outcomes compared with conventional treatment. Infants with bilateral high-risk prethreshold ROP (n = 317) had one eye randomized to early treatment with the fellow eye managed conventionally (control eye). In asymmetric cases (n = 84), the eye with high-risk prethreshold ROP was randomized to early treatment or conventional management. High risk was determined using a model based on the Multicenter Trial of Cryotherapy for Retinopathy of Prematurity natural history cohort. At a corrected age of 9 months, visual acuity was assessed by masked testers using the Teller acuity card procedure. At corrected ages of 6 and 9 months, eyes were examined for structural outcome. Outcomes for the 2 treatment groups of eyes were compared using chi2 analysis, combining data for bilateral and asymmetric cases. Grating acuity results showed a reduction in unfavorable visual acuity outcomes with earlier treatment, from 19.5% to 14.5% (P =.01). Unfavorable structural outcomes were reduced from 15.6% to 9.1% (P<.001) at 9 months. Further analysis supported retinal ablative therapy for eyes with type 1 ROP, defined as zone I, any stage ROP with plus disease (a degree of dilation and tortuosity of the posterior retinal blood vessels meeting or exceeding that of a standard photograph); zone I, stage 3 ROP without plus disease; or zone II, stage 2 or 3 ROP with plus disease. The analysis supported a wait-and-watch approach to type 2 ROP, defined as zone I, stage 1 or 2 ROP without plus disease or zone II, stage 3 ROP without plus disease. These eyes should be considered for treatment only if they progress to type 1 or threshold ROP. Early treatment of high-risk prethreshold ROP significantly reduced unfavorable outcomes to a clinically important degree. Additional analyses led to modified recommendations for the use of peripheral retinal ablation in eyes with ROP. Long-term follow-up is being conducted to learn whether the benefits noted in the first year after birth will persist into childhood.

H Lilja,  Louise J. P. Persson,  A Selbing … (1996)
Available standard intrauterine growth curves based on birthweights underestimate foetal growth in preterm period. New growth curves are presented based on data from four Scandinavian centres for 759 ultrasonically estimated foetal weights in 86 uncomplicated pregnancies. Mean weight of boys exceeded that of girls by 2-3%. A uniform SD value of 12% of the mean weight was adopted for the standard curves as the true SD varied non-systematically between 9.1 and 12.4%. Applied to an unselected population of 8663 singleton births, before 210 days of gestation, 32% of birthweights were classified as small-for-gestational age (SGA; i.e. below mean - 2 SD); the corresponding figures were 11.1% for gestational ages between 210 and 258 days, and 2.6% for ages of 259 days or longer. The new growth curves reveal better the true distribution of SGA foetuses and neonates, and are suggested for use in perinatological practice.

Longitudinal postnatal weight and insulin-like growth factor I measurements in the prediction of retinopathy of prematurity.

Aimon Niklasson,  Lois E. H. Smith,  Eva Engström … (2006)
To investigate whether postnatal growth and development influence retinopathy of prematurity (ROP) and may be included in screening for ROP. We developed an algorithm to predict for individual infants the risk of later ROP development requiring treatment based on the postnatal longitudinal systemic factors of insulin-like growth factor I (IGF-I) level, IGF binding protein 3 level, and postnatal weight gain. We developed the algorithm based on 79 preterm infants considered at risk for ROP by standard criteria (gestational age, 23.6-31.7 weeks) in a longitudinal study measuring weight gain and serum IGF-I and IGF binding protein 3 levels weekly from birth until discharge from the hospital. We monitored deviations from reference models for weight and IGF-I level (preterm children who developed no or minimal ROP) to detect indications for treatable ROP by Early Treatment for Retinopathy of Prematurity study criteria. This monitoring method detected 6 (100%) of 6 infants in this cohort who required treatment for ROP with a warning signal at least 5 weeks before requiring treatment and at least 3 weeks before the onset of stage 3 ROP. The majority of infants (61/73 infants) requiring no treatment were also correctly identified. Monitoring the postnatal factors of weight, IGF-I level, and IGF binding protein 3 level substantially enhances the clinician's ability to identify patients who will require treatment for ROP.