CHINESE HERBAL DECOCTION AS A COMPLEMENTARY THERAPY FOR ATROPHIC GASTRITIS: A SYSTEMATIC REVIEW AND META-ANALYSIS 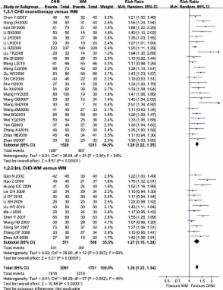 Chinese herbal decoction (CHD) has been extensively used in the treatment of atrophic gastritis (AG) in China and other Far Eastern countries. We conducted a systematic review and meta-analysis to estimate the efficacy and safety of CHD in AG.

Forty-two articles including 3,874 patients were identified. CHD, used alone or with WM, had beneficial effect over WM in the improvement of clinical manifestations (RR=1.28; 95% CI 1.22-1.34) and pathological change (RR=1.42; 95% CI 1.30-1.54) for AG patients. However, the H. pylori eradication effect of CHD was not supported by the existing clinical evidence, because of the significant study heterogeneity (I 2>50%) and inconsistency between the primary results and sensitivity analysis.

CHD, if prescribed as a complementary therapy to WM, may improve the clinical manifestations and pathological change for AG patients. But its monotherapy for H. pylori eradication is not supported by enough clinical evidence.

R DerSimonian,  N Laird (1986)
This paper examines eight published reviews each reporting results from several related trials. Each review pools the results from the relevant trials in order to evaluate the efficacy of a certain treatment for a specified medical condition. These reviews lack consistent assessment of homogeneity of treatment effect before pooling. We discuss a random effects approach to combining evidence from a series of experiments comparing two treatments. This approach incorporates the heterogeneity of effects in the analysis of the overall treatment efficacy. The model can be extended to include relevant covariates which would reduce the heterogeneity and allow for more specific therapeutic recommendations. We suggest a simple noniterative procedure for characterizing the distribution of treatment effects in a series of studies.

Reported methodologic quality and discrepancies between large and small randomized trials in meta-analyses.

Helicobacter pylori treatment in the era of increasing antibiotic resistance.

Ian Graham,  Ruth Fischbach (2010)
With few exceptions, the most commonly recommended triple Helicobacter pylori regimen (proton pump inhibitor (PPI), amoxicillin and clarithromycin) now provides unacceptably low treatment success. A review of worldwide results suggests that successful eradication using a triple regimen is not consistently observed in any population. Clinicians should use 'only use what works locally' and ignore consensus statements and society guidelines if they are not consistent with local results. Clinical trials should be result based, with the goal of identifying regimens with >90-95% success. New treatments should be only be compared with the currently locally effective treatment (>90%) or a historical untreated control (which has been shown to reliably yield 0% eradication); trials using placebos or treatments known to be inferior are with rare exceptions unethical. If a highly effective regimen is not available locally, we recommend trying a 14 day concomitant quadruple treatment regimen containing a PPI, amoxicillin, clarithromycin and a nitroimidazole; 10 day sequential treatment (PPI plus amoxicillin for 5 days followed by a PPI, clarithromycin and a nitroimidazole for 5 days); or 14 day bismuth-containing quadruple treatments. Treatments needing further evaluation include those containing furazolidone or nitazoxanide, hybrids of sequential-concomitant therapies and amoxicillin-PPI dual therapy with PPI doses such that they maintain intragastric pH >6.

The first three authors contributed equally to this work

This work is licensed under a Creative Commons Attribution-NonCommercial-NoDerivatives 4.0 International License