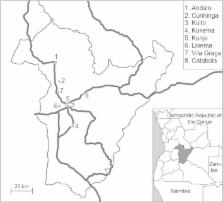 Distribution of Anaplasma spp., Babesia spp., Theileria spp., and Ehrlichia ruminantium, was for the first time studied in Bié Province, central Angola. We examined 76 blood samples of cattle originated from seven farms, and 13 blood samples of goats from two farms employing molecular genetic tools (PCR). Most prevalent was A. ovis-infection in goats (100%) and A. marginale-infection in cattle (38% of examined animals, and six out of seven farms). B. bigemina-infection was detected in only one specimen at Andulo, whereas B. bovis was not detected in Bié. We did not detected T. parva, the causative agent of serious diseases in cattle; nevertheless, infection by T. velifera was quite frequent (14% of examined animals, and five out of seven farms). Causative agent of heartwater disease – E. ruminantium, was not detected. Taking into account short-term perspective of PCR methods in monitoring of epidemiological status in herds, the number of infected animals and distribution of detected pathogens should not be ignored.

The natural history of Anaplasma marginale.

Katherine Kocan,  José de la Fuente,  Edmour Blouin … (2010)
The intracellular pathogen Anaplasma marginale (Rickettsiales: Anaplasmataceae), described by Sir Arnold Theiler in 1910, is endemic worldwide in tropical and subtropical areas. Infection of cattle with A. marginale causes bovine anaplasmosis, a mild to severe hemolytic disease that results in considerable economic loss to both dairy and beef industries. Transmission of A. marginale to cattle occurs biologically by ticks and mechanically by biting flies and by blood-contaminated fomites. Both male ticks and cattle hosts become persistently infected with A. marginale and serve as reservoirs of infection. While erythrocytes are the major site of infection in cattle, A. marginale undergoes a complex developmental cycle in ticks that begins by infection of gut cells, and transmission to susceptible hosts occurs from salivary glands during feeding. Major surface proteins (MSPs) play a crucial role in the interaction of A. marginale with host cells, and include adhesion proteins and MSPs from multigene families that undergo antigenic change and selection in cattle, thus contributing to maintenance of persistent infections. Many geographic strains of A. marginale have been identified worldwide, which vary in genotype, antigenic composition, morphology and infectivity for ticks. Isolates of A. marginale may be maintained by independent transmission events and a mechanism of infection/exclusion in cattle and ticks. The increasing numbers of A. marginale genotypes identified in some geographic regions most likely resulted from intensive cattle movement. However, concurrent A. marginale strain infections in cattle was reported, but these strains were more distantly related. Phylogenetic studies of selected geographic isolates of A. marginale, using msp4 and msp1alpha, provided information about the biogeography and evolution of A. marginale, and msp1alpha genotypes appear to have evolved under positive selection pressure. Live and killed vaccines have been used for control of anaplasmosis and both types of vaccines have advantages and disadvantages. Vaccines have effectively prevented clinical anaplasmosis in cattle but have failed to block A. marginale infection. Vaccines are needed that can prevent clinical disease and, simultaneously, prevent infection in cattle and ticks, thus eliminating these hosts as reservoirs of infection. Advances in genomics, proteomics, immunology and biochemical and molecular technologies during the last decade have been applied to research on A. marginale and related organisms, and the recent development of a cell culture system for A. marginale has provided a format for studying the pathogen/tick interface. Recent advancements and new research methodologies should provide additional opportunities for development of new strategies for control and prevention of bovine anaplasmosis.

Gerrit Uilenberg (1995)
A general review is given of the tick-borne hemoparasitic diseases of greatest economic importance in ruminants, babesiosis, anaplasmosis, theileriosis and cowdriosis, each caused by one or more species of hemoparasites. Most affected are cattle and small ruminants, buffalo are more resistant and little is known regarding camels. The situation varies from one continent or region to another. Innate and breed susceptibility to these diseases are of tremendous importance. Disease in the field cannot be considered separated from the whole complex of tick-borne diseases and from the ticks themselves, particularly if the aim is to attain endemic stability. International coordination is needed now that research funds are scarce. An appendix contains tables with hemoparasites of various domestic animals and notes with background details.

Carol A Francisco,  Joel R. Bock,  Mads Jørgensen … (2003)
Tick fever or cattle fever (babesiosis) is economically the most important arthropod-borne disease of cattle worldwide with vast areas of Australia, Africa, South and Central America and the United States continuously under threat. Tick fever was the first disease for which transmission by an arthropod to a mammal was implicated at the turn of the twentieth century and is the first disease to be eradicated from a continent (North America). This review describes the biology of Babesia spp. in the host and the tick, the scale of the problem to the cattle industry, the various components of control programmes, epidemiology, pathogenesis, immunity, vaccination and future research. The emphasis is on Babesia bovis and Babesia bigemina.