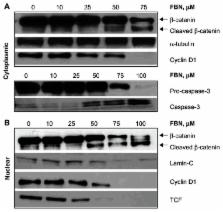 The Wnt/β-catenin/T cell factor (TCF) signaling pathway is important in the development of nonmelanoma skin cancers (NMSCs). Nitric-oxide-releasing nonsteroidal anti-inflammatory drugs (NO-NSAIDs) are chemopreventive agents consisting of a traditional NSAID attached to an NO-releasing moiety through a chemical spacer. Previously we showed that an aromatic spacer enhanced the potency of a particular NO-NSAID compared to an aliphatic spacer.

We synthesized an NO-releasing NSAID with an aromatic spacer (flurbiprofen benzyl nitrate, NBS-242), and using the human skin cancer cell line A-431, we evaluated its effects on cell kinetics, Wnt/β-catenin, cyclin D1, and caspase-3.

NBS-242 inhibited the growth of A-431 cancer cells, being ~15-fold more potent than flurbiprofen and up to 5-fold more potent than NO-flurbiprofen with an aliphatic spacer, the half maximal inhibitory concentrations (IC 50) for growth inhibition being 60 ± 4 μM, 320 ± 20 μM, and 880 ± 65 μM for NBS-242, NO-flurbiprofen, and flurbiprofen, respectively. This effect was associated with inhibition of proliferation, accumulation of cells in the G 0/G 1 phase of the cell cycle, and an increase in apoptotic cell population. NBS-242 cleaved β-catenin both in the cytoplasm and the nucleus of A-431 cells. NBS-242 activated caspase-3 whose activation was reflected in the cleavage of procaspase-3. To test the functional consequence of β-catenin cleavage, we determined the expression of cyclin D1, a Wnt-response gene. NBS-242 reduced cyclin D1 levels in a concentration dependent manner.

These findings establish a strong inhibitory effect of NBS-242 in A-431 human epidermoid carcinoma cells. NBS-242 modulates parameters that are important in determining cellular mass.

M Thun,  S. J. Henley,  C Patrono (2002)
Numerous experimental, epidemiologic, and clinical studies suggest that nonsteroidal anti-inflammatory drugs (NSAIDs), particularly the highly selective cyclooxygenase (COX)-2 inhibitors, have promise as anticancer agents. NSAIDs restore normal apoptosis in human adenomatous colorectal polyps and in various cancer cell lines that have lost adenomatous polyposis coli gene function. NSAIDs also inhibit angiogenesis in cell culture and rodent models of angiogenesis. Many epidemiologic studies have found that long-term use of NSAIDs is associated with a lower risk of colorectal cancer, adenomatous polyps, and, to some extent, other cancers. Two NSAIDs, sulindac and celecoxib, have been found to inhibit the growth of adenomatous polyps and cause regression of existing polyps in randomized trials of patients with familial adenomatous polyposis (FAP). However, unresolved questions about the safety, efficacy, optimal treatment regimen, and mechanism of action of NSAIDs currently limit their clinical application to the prevention of polyposis in FAP patients. Moreover, the development of safe and effective drugs for chemoprevention is complicated by the potential of even rare, serious toxicity to offset the benefit of treatment, particularly when the drug is administered to healthy people who have low annual risk of developing the disease for which treatment is intended. This review considers generic approaches to improve the balance between benefits and risks associated with the use of NSAIDs in chemoprevention. We critically examine the published experimental, clinical, and epidemiologic literature on NSAIDs and cancer, especially that regarding colorectal cancer, and identify strategies to overcome the various logistic and scientific barriers that impede clinical trials of NSAIDs for cancer prevention. Finally, we suggest research opportunities that may help to accelerate the future clinical application of NSAIDs for cancer prevention or treatment.

D Rogier,  Matthew Perkins,  J W Malecha … (1997)
A series of sulfonamide-containing 1,5-diarylpyrazole derivatives were prepared and evaluated for their ability to block cyclooxygenase-2 (COX-2) in vitro and in vivo. Extensive structure-activity relationship (SAR) work was carried out within this series, and a number of potent and selective inhibitors of COX-2 were identified. Since an early structural lead (1f, SC-236) exhibited an unacceptably long plasma half-life, a number of pyrazole analogs containing potential metabolic sites were evaluated further in vivo in an effort to identify compounds with acceptable pharmacokinetic profiles. This work led to the identification of 1i (4-[5-(4-methylphenyl)-3-(trifluoromethyl)- H-pyrazol-1-yl]benzenesulfonamide, SC-58635, celecoxib), which is currently in phase III clinical trials for the treatment of rheumatoid arthritis and osteoarthritis.