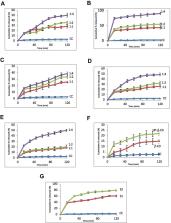 The objective of this study was to compare different techniques to enhance the solubility and dissolution rate, and hence the bioavailability of candesartan cilexetil.

To achieve this target, various techniques were employed such as solid dispersions, inclusion complexes, and preparation of candesartan nanoparticles. Following the preparations, all samples were characterized for their physicochemical properties, and the samples of the best results were subjected to further bioavailability studies.

Results of dissolution studies revealed an increase in the dissolution rate of all samples. The highest dissolution rate was achieved using solid dispersion of the drug with PVP K-90 (1:4). Physicochemical investigations (XR, DSC, and FT-IR) suggested formation of hydrogen bonding and changing in the crystalline structure of the drug. Regarding the inclusion complexes, more stable complex was formed between HP-β-CD and CC compared to β-CD, as indicated by phase solubility diagrams. Antisolvent method resulted in the preparation of stable nanoparticles, as indicated by ζ potential, with average particle size of 238.9 ± 19.25 nm using PVP K-90 as a hydrophilic polymer. The best sample that gave the highest dissolution rate (CC/PVP K-90 1:4) was allowed for further pharmacokinetic studies using UPLC MS/MS assay of rabbit plasma. Results showed a significant increase in the bioavailability of CC from ~15% to ~48%.

The bioavailability of CC was significantly improved from ~15% to ~48% when formulated as SDs with PVP K-90 with 1:4 drug:polymer ratio.

PKSolver: An add-in program for pharmacokinetic and pharmacodynamic data analysis in Microsoft Excel.

Yong Zhang,  Meirong Huo,  Jianping Zhou … (2010)
This study presents PKSolver, a freely available menu-driven add-in program for Microsoft Excel written in Visual Basic for Applications (VBA), for solving basic problems in pharmacokinetic (PK) and pharmacodynamic (PD) data analysis. The program provides a range of modules for PK and PD analysis including noncompartmental analysis (NCA), compartmental analysis (CA), and pharmacodynamic modeling. Two special built-in modules, multiple absorption sites (MAS) and enterohepatic circulation (EHC), were developed for fitting the double-peak concentration-time profile based on the classical one-compartment model. In addition, twenty frequently used pharmacokinetic functions were encoded as a macro and can be directly accessed in an Excel spreadsheet. To evaluate the program, a detailed comparison of modeling PK data using PKSolver and professional PK/PD software package WinNonlin and Scientist was performed. The results showed that the parameters estimated with PKSolver were satisfactory. In conclusion, the PKSolver simplified the PK and PD data analysis process and its output could be generated in Microsoft Word in the form of an integrated report. The program provides pharmacokinetic researchers with a fast and easy-to-use tool for routine and basic PK and PD data analysis with a more user-friendly interface. Copyright 2010 Elsevier Ireland Ltd. All rights reserved.

Nanosuspensions as particulate drug formulations in therapy. Rationale for development and what we can expect for the future.

O Kayser,  R Müller,  Chris Jacobs (2001)
An increasing number of newly developed drugs are poorly soluble; in many cases drugs are poorly soluble in both aqueous and organic media excluding the traditional approaches of overcoming such solubility factors and resulting in bioavailability problems. An alternative and promising approach is the production of drug nanoparticles (i.e. nanosuspensions) to overcome these problems. The major advantages of this technology are its general applicability to most drugs and its simplicity. In this article, the production of nanoparticles on a laboratory scale is presented, special features such as increased saturation solubility and dissolution velocity are discussed, and special applications are highlighted, for example, mucoadhesive nanosuspensions for oral delivery and surface-modified drug nanoparticles for site-specific delivery to the brain. The possibilities of large scale production -- the prerequisite for the introduction of a delivery system to the market -- are also discussed.

Sarabjeet Singh Suri,  Hicham Fenniri,  Baljit Singh (2007)
Nanoparticles hold tremendous potential as an effective drug delivery system. In this review we discussed recent developments in nanotechnology for drug delivery. To overcome the problems of gene and drug delivery, nanotechnology has gained interest in recent years. Nanosystems with different compositions and biological properties have been extensively investigated for drug and gene delivery applications. To achieve efficient drug delivery it is important to understand the interactions of nanomaterials with the biological environment, targeting cell-surface receptors, drug release, multiple drug administration, stability of therapeutic agents and molecular mechanisms of cell signalling involved in pathobiology of the disease under consideration. Several anti-cancer drugs including paclitaxel, doxorubicin, 5-fluorouracil and dexamethasone have been successfully formulated using nanomaterials. Quantom dots, chitosan, Polylactic/glycolic acid (PLGA) and PLGA-based nanoparticles have also been used for in vitro RNAi delivery. Brain cancer is one of the most difficult malignancies to detect and treat mainly because of the difficulty in getting imaging and therapeutic agents past the blood-brain barrier and into the brain. Anti-cancer drugs such as loperamide and doxorubicin bound to nanomaterials have been shown to cross the intact blood-brain barrier and released at therapeutic concentrations in the brain. The use of nanomaterials including peptide-based nanotubes to target the vascular endothelial growth factor (VEGF) receptor and cell adhesion molecules like integrins, cadherins and selectins, is a new approach to control disease progression.