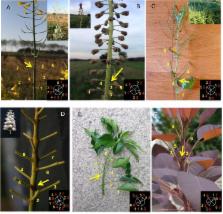 Exploration of developmental mechanisms classically relies on analysis of pattern regularities. Whether disorders induced by biological noise may carry information on building principles of developmental systems is an important debated question. Here, we addressed theoretically this question using phyllotaxis, the geometric arrangement of plant aerial organs, as a model system. Phyllotaxis arises from reiterative organogenesis driven by lateral inhibitions at the shoot apex. Motivated by recurrent observations of disorders in phyllotaxis patterns, we revisited in depth the classical deterministic view of phyllotaxis. We developed a stochastic model of primordia initiation at the shoot apex, integrating locality and stochasticity in the patterning system. This stochastic model recapitulates phyllotactic patterns, both regular and irregular, and makes quantitative predictions on the nature of disorders arising from noise. We further show that disorders in phyllotaxis instruct us on the parameters governing phyllotaxis dynamics, thus that disorders can reveal biological watermarks of developmental systems.

Plants grow throughout their lifetime, forming new flowers and leaves at the tips of their stems through a patterning process called phyllotaxis, which occurs in spirals for a vast number of plant species. The classical view suggests that the positioning of each new leaf or flower bud at the tip of a growing stem is based on a small set of principles. This includes the idea that buds produce inhibitory signals that prevent other buds from forming too close to each other. When computational models of phyllotaxis follow these ‘deterministic’ principles, they are able to recreate the spiral pattern the buds form on a growing stem.

In real plants, however, the spiral pattern is not always perfect. The observed disturbances in the pattern are believed to reflect the presence of random fluctuations – regarded as noise – in phyllotaxis. Here, using numerical simulations, Refahi et al. noticed that the patterns of inhibitory signals in a shoot tip pre-determine the locations of several competing sites where buds could form in a robust manner. However, random fluctuations in the way cells perceive these inhibitory signals could greatly disturb the timing of organ formation and affect phyllotaxis patterns.

Building on this, Refahi et al. created a new computational model of bud patterning that takes into account some randomness in how cells perceive the inhibitory signals released by existing buds. The model can accurately recreate the classical spiral patterns of buds and also produces occasional disrupted patterns that are similar to those seen in real plants. Unexpectedly, Refahi et al. show that these ‘errors’ reveal key information about how the signals that control phyllotaxis might work.

These findings open up new avenues of research into the role of noise in phyllotaxis. The model can be used to predict how altering the activities of genes or varying plant growth conditions might disturb this patterning process. Furthermore, the work highlights how the structure of disturbances in a biological system can shed new light on how the system works.

A novel sensor to map auxin response and distribution at high spatio-temporal resolution.

W H Burrow,  Jan Traas,  Teva Vernoux … (2012)
Auxin is a key plant morphogenetic signal but tools to analyse dynamically its distribution and signalling during development are still limited. Auxin perception directly triggers the degradation of Aux/IAA repressor proteins. Here we describe a novel Aux/IAA-based auxin signalling sensor termed DII-VENUS that was engineered in the model plant Arabidopsis thaliana. The VENUS fast maturing form of yellow fluorescent protein was fused in-frame to the Aux/IAA auxin-interaction domain (termed domain II; DII) and expressed under a constitutive promoter. We initially show that DII-VENUS abundance is dependent on auxin, its TIR1/AFBs co-receptors and proteasome activities. Next, we demonstrate that DII-VENUS provides a map of relative auxin distribution at cellular resolution in different tissues. DII-VENUS is also rapidly degraded in response to auxin and we used it to visualize dynamic changes in cellular auxin distribution successfully during two developmental responses, the root gravitropic response and lateral organ production at the shoot apex. Our results illustrate the value of developing response input sensors such as DII-VENUS to provide high-resolution spatio-temporal information about hormone distribution and response during plant growth and development.

Adam C. Wilkinson (2009)
Two related developments are currently changing traditional approaches to computational systems biology modelling. First, stochastic models are being used increasingly in preference to deterministic models to describe biochemical network dynamics at the single-cell level. Second, sophisticated statistical methods and algorithms are being used to fit both deterministic and stochastic models to time course and other experimental data. Both frameworks are needed to adequately describe observed noise, variability and heterogeneity of biological systems over a range of scales of biological organization.

Alexis Peaucelle,  Siobhan A. Braybrook,  Laurent Le Guillou … (2011)
Tissue mechanics have been shown to play a key role in the regulation of morphogenesis in animals [1-4] and may have an equally important role in plants [5-9]. The aerial organs of plants are formed at the shoot apical meristem following a specific phyllotactic pattern [10]. The initiation of an organ from the meristem requires a highly localized irreversible surface deformation, which depends on the demethylesterification of cell wall pectins [11]. Here, we used atomic force microscopy (AFM) to investigate whether these chemical changes lead to changes in tissue mechanics. By mapping the viscoelasticity and elasticity in living meristems, we observed increases in tissue elasticity, correlated with pectin demethylesterification, in primordia and at the site of incipient organs. Measurements of tissue elasticity at various depths showed that, at the site of incipient primordia, the first increases occurred in subepidermal tissues. The results support the following causal sequence of events: (1) demethylesterification of pectin is triggered in subepidermal tissue layers, (2) this contributes to an increase in elasticity of these layers-the first observable mechanical event in organ initiation, and (3) the process propagates to the epidermis during the outgrowth of the organ. Copyright © 2011 Elsevier Ltd. All rights reserved.