Clinical characteristics and outcomes among hospitalized adults with severe COVID-19 admitted to a tertiary medical center and receiving antiviral, antimalarials, glucocorticoids, or immunomodulation with tocilizumab or cyclosporine: A retrospective observational study (COQUIMA cohort) 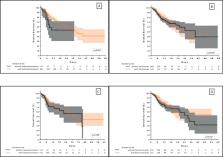 The COVID-19 outbreak challenges the Spanish health system since March 2020. Some available therapies (antimalarials, antivirals, biological agents) were grounded on clinical case observations or basic science data. The aim of this study is to describe the characteristics and impact of different therapies on clinical outcomes in a cohort of severe COVID-19 patients.

In this retrospective, single-center, observational study, we collected sequential data on adult patients admitted to Hospital Universitario Quironsalud Madrid. Eligible patients should have a microbiological (positive test on RT-PCR assay from a nasal swab) or an epidemiological diagnosis of severe COVID-19. Demographic, baseline comorbidities, laboratory data, clinical outcomes, and treatments were compared between survivors and non-survivors. We carried out univariate and multivariate logistic regression models to assess potential risk factors for in-hospital mortality.

In a real-clinical setting, inhibition of the calcineurin inflammatory pathway, NF-κΒ, could reduce the hyperinflammatory phase in COVID-19. Our findings might entail relevant implications for the therapy of this disease and could boost the design of new clinical trials among subjects affected by severe COVID-19.

The SARS-Coronavirus-Host Interactome: Identification of Cyclophilins as Target for Pan-Coronavirus Inhibitors

Inhibition of Bruton tyrosine kinase in patients with severe COVID-19

Replication of human coronaviruses SARS-CoV, HCoV-NL63 and HCoV-229E is inhibited by the drug FK506